Being Catholic in a Culture of Choice 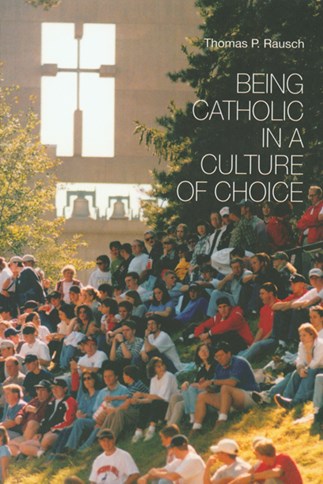 What will the next generation of Catholics be like? Will they have a strong sense of their identity as Catholic Christians, or will they reflect a more generic Christian identity, without the distinctives associated with Catholicism?

Some social commentators suggest that the Catholic identity of young adult Catholics is in jeopardy, with a less ecclesial faith, a thin commitment to the institutional church, and a lack of familiarity with the Catholic tradition. Others argue that there are signs that a new generation of younger Catholics is emerging, not all of whom fall easily into the liberal/conservative categories, though many Catholics over fifty tend to dismiss them as conservative, neo-conservative, or even restorationist.

Thomas Rausch’s book examines a number of recent studies of young adult Catholics as well as different ways that being Catholic is developed and supported, from the Catholic imagination to a reexamination of Christian origins in the light of the charges made in The Da Vinci Code, to the domestic church and Catholic colleges and universities.

Thomas P. Rausch, SJ, PhD, is the T. Marie Chilton Professor of Catholic Theology at Loyola Marymount University in Los Angeles. He is the author of Towards a Truly Catholic Church, Who is Jesus?, Catholicism in the Third Millennium, and editor of the bestselling The College Student’s Introduction to Theology, all published by Liturgical Press.

Rausch writes as a university professor who clearly knows the statistics but also can share his experiences working with younger adults.
Catholic News Service

Numerous church commentators have suggested that, in a postmodern world, sustaining Catholic identity will be among the greatest challenges facing the church today. No theologian has more insightfully addressed these challenges than Tom Rausch. His careful analysis of our contemporary culture of choice and its implications for Catholic identity ends, not in despair, but in a vigorous reaffirmation of a robust Catholicism that can still speak to our world. He does not yield to a new Catholic triumphalism and dogmatism, but appeals instead for a more developed Catholic imagination. His mastery of contemporary theology is obvious, yet it is displayed with a light and accessible touch. Rausch's critique of contemporary Catholicism is often brutally honest, yet his proposals for church renewal are realistic and compelling.
Richard R. Gaillardetz, Ph.D., Department of Philosophy, Murray/Bacik Professor

Being Catholic in a Culture of Choice is essential reading for anyone in a pastoral role who deals with young adults.
Liguorian

Father Rausch has made an important contribution to the discussion around mission in Catholic higher education. His books are well worth the effort and those of us concerned with mission owe him a debt of gratitude.
Collegium News

Where will the next generation of American Catholics come from? If you're concerned about that question, you should read Being Catholic in a Culture of Choice. Rausch offers a searching look at the challenges of forming Catholics in the setting of U.S. pluralism. He focuses on the key issue of post-subcultural Catholic identity as formed in both families and institutions. The chapter on The DaVinci Code is an added bonus.
William L. Portier, Mary Ann Spearin, Chair of Catholic Theology, University of Dayton

Rausch offers Catholics somewhat at sea in the constantly busy, media-driven culture readily accessible ways to strengthen and as they wish express their religion.
The Midwest Book Review

Rausch has given us an informative and thought-provoking portrait of key issues facing the church in its mission of evangelization, particularly to young United States Catholics. This book is worthwhile and accessible reading for all who have explicit responsibilities for aspects of that evangelization and for everyone with a stake in its success.
American Catholic Studies

Written for Catholics of all ages though for the younger generations in particular, the work imparts general guidance and counsel while also confronting contemporary circumstances . . . In a tone free of either worry or authoritarianism, but palpably rooted in shared concerns and questions, Rausch offers Catholics somewhat at sea in the constantly busy, media-driven culture readily accessible ways to strengthen and as they wish, express their religion.
Midwest Book Review

. . . carefully sketches differences (with strengths and weaknesses) between various present-day young Catholics and Catholics of previous generations-all of whom now live in a culture of choice. Rausch expects teachers and his other readers not so much to do anything as to understand themselves and the varieties of young people better in the future.
Review for Religious

. . . this resource is filled with thought-provoking information and reflections, any of which could be the basis for discussion among Church leaders, parish staff, and members of faith-sharing groups.
Writing Works