Preacher of Grace, Poet of Truth 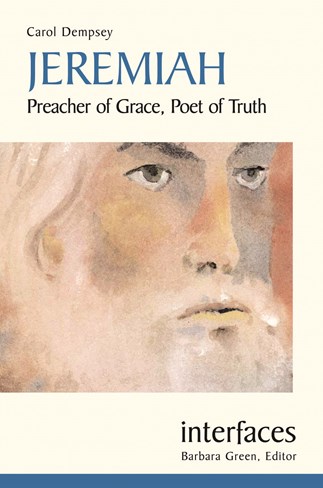 What does it mean to be deeply in love with God and, at the same time, with a person, a group, or a nation that is at odds with God? Such is the dilemma of the prophet Jeremiah, and it is an experience not unfamiliar to many in our own day. The lesson of Jeremiah’s story is that, no matter how unfaithful humans may be, God remains always faithful, always ready to forgive and to right the wrongs humans have wrought.

Using the tools of rhetorical and narrative criticism, Carol Dempsey develops the character Jeremiah as a literary figure, a messenger not only to his own people but to all readers of his book. In keeping with the purposes of the Interfaces series, she helps us sharpen our critical skills by examining the text’s presentation of a biblical character not in isolation but interacting, interfacing, with others in his milieu and, implicitly, in ours.

Jeremiah is both prophet and poet, as Dempsey shows. She examines the prophet as both gifted and burdened by his mission and the word given to him, a word personal to himself and repugnant to his audience. Ultimately, it is Jeremiah’s relationship with God, in its depth and its tension, that shapes his character’and that of his audience as well. In the end, Jeremiah’s struggles move him from pathos to trust, from imprisonment to freedom, from desperation to conviction, leaving him and his readers with a sense of wonder at the mystery of God.

Carol J. Dempsey, OP, PhD, is Associate Professor of Theology (Biblical Studies) with particular expertise in Old Testament and Prophets at the University of Portland, OR.

Like other books in this fine series, this study is well researched and a delight to read. . . . This study not only sketches Jeremiah's importance for his own day but also offers him as a prophetic guide for the believers of today.
The Bible Today

. . . brings Jeremiah to life as a literary character who was not only a passionate prophet but also a skilled and poetic preacher.
Old Testament Abstracts

Carol Dempsey not only provides an accurate description of the creative rhetoric and imaginative narrative found in Jeremiah, but also brings Jeremiah alive for contemporary audiences. For her Jeremiah is no dusty museum piece, but rather a book witnessing to a prophet whose voice still speaks today.
Mark J. Boda, Professor of Old Testament, McMaster Divinity College; Professor of Theology, McMaster University

This synchronic analysis provides students with a helpful example of recent characterization methods, especially those that psychologize and dramatize the biblical character.
Religious Studies Review

As a guide into the complex and beautiful book of Jeremiah, Dempsey is deft and sure, never pedantic. She invites readers to develop the literary skills necessary to reach the depth dimension of this incomparable poetry. At the same time, she consistently points to the boundless mystery of the prophet's life with God, and she does so in ways that illumine our own.
Ellen F. Davis, Professor of Bible and Practical Theology, Duke Divinity School

Dempsey has offered a wonderful glimpse into one of the most passionate characters in the Hebrew Bible. . . . I recommend Jeremiah: Preacher of Grace, Poet of Truth as a foray into the captivating figure of the biblical prophet, interfacing with God and people, holding onto faithfulness in the midst of a very trying time.
Review of Biblical Literature

This dynamic master piece, in six chapters, presents Jeremiah as a great poet of grace and a prophet par excellence-a prophet who intimately loves God and his people at all cost. . . . this is a book worth reading by all who seek wisdom and faith. It is a timely contributing material for all who search for meaning to life.
LIVROS NOVOS

Dempsey is an eloquent and passionate interpreter of Jeremiah, and readers of this beautifully written book will be instructed by her excellent overview of theological issues at stake in the biblical material and drawn into a rich portrait of Jeremiah as hero. Read in conjunction with other sources that more fully explore questions of literary theory and ideological criticism, this book will serve as an engaging resource for undergraduates seeking a way into the Bible.
Society of Biblical Literature