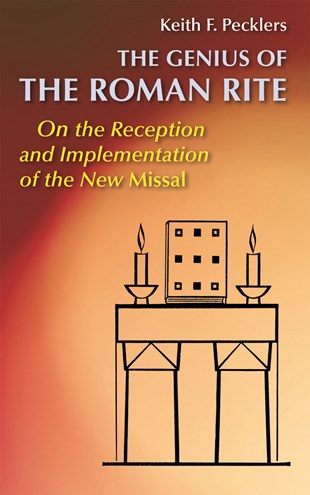 The Genius of the Roman Rite

On the Reception and Implementation of the New Missal
Keith F. Pecklers

The Roman Rite has evolved over the centuries in very diverse contexts and situations, and it has endured to our own day precisely because of its capacity to adapt and be shaped by the distinct cultures where it has been celebrated. In 2002 the Latin third edition of the Missale Romanum was promulgated and in subsequent years episcopal conferences have been busy at work producing vernacular translations of that Latin text. As the English-speaking world prepares to receive and implement the English translation of the Missal, Dr. Pecklers' book is offered as an instrument of catechesis in helping clergy and laity alike to better grasp the rationale for the new translations by considering the wider context of the Rite itself.

Keith F. Pecklers, SJ, is professor of liturgy at the Pontifical Gregorian University and professor of liturgical history at the Pontifical Liturgical Institute in Rome. He is the author of the following titles published by Liturgical Press: Dynamic Equivalence: The Living Language of Christian Worship; The Unread Vision: The Liturgical Movement in the United States of America 1926-1955; Worship: A Primer in Christian Ritual; and editor of Liturgy for the New Millennium: A Commentary on the Revised Sacramentary. He is also the author of "Liturgy from Trent to Vatican II" included in the Handbook of Liturgical Studies published by Liturgical Press.

This book ought to be everyone's first overview of the Roman Missal, Third Edition. It will be a good measure against which everything else to be published over the next years may be measured.
Liturgical Ministry


Considering both the process of translation and official documents, the author shows the way to sound instruction in the next few years. He points out sound elements in the new translation and various elements of the new version of The Roman Missal. Finally, the author advocates a mystogogical catechesis, not just a practical instruction. People need to return to the basis of their faith and the heart of the Church's tradition. This is an excellent book.
Parish Liturgy Magazine


Pecklers's book is a concise and accessible resource for all those who wish to understand the Roman Missal and the reasons for the proposed changes. Its own genius is as a valuable source of catechesis for those involved in the implementation of the new Missal.
Catechetical Leader


In The Genius of the Roman Rite, Father Pecklers offers a concise history of the Roman rite, its reform at the Second Vatican Council, and its future in the twenty-first century and beyond. The Church's prayer, especially at Mass, is part and parcel of living tradition under the guidance of the Spirit. Father Pecklers shows us how the future of our liturgical prayer and the future of our Church are closely bound together. The Genius of the Roman Rite is helpful reading for all those who would understand the third edition of the Roman Missal.
Most Rev. Timothy M. Dolan
Archbishop of New York


[The Genius of the Roman Rite] is concise, thorough, balanced, and faithful and deserves the widest possible readership. . . . [It] covers a great deal of ground extremely well within the confines of a relatively short work. Clearly written and jargon free, a theology degree is not required to understand it. Fr. Pecklers has written with the people in the pews in mind rather than specialists in liturgy. Nevertheless, the book will also be helpful to clergy, both in their own continuing liturgical formation and as a source of material to be put before their congregations. . . . Fr. Pecklers' book should be an essential tool in bringing about the faithful and faith-filled implementation of the new Missal.
Catholic Weekly


[A]nyone responsible for introducing the new translation will benefit greatly from reading this book.
Pastoral Music


[U]seful to both experts responsible for preparing parishes for the new translation and to ordinary readers who want to know the larger historical context for what is an ongoing and necessary process that preserves the doctrinal accuracy of sacred texts while keeping them relevant and proclaimable as public worship.
Worship & Liturgy