Between Memory and Hope

Readings on the Liturgical Year 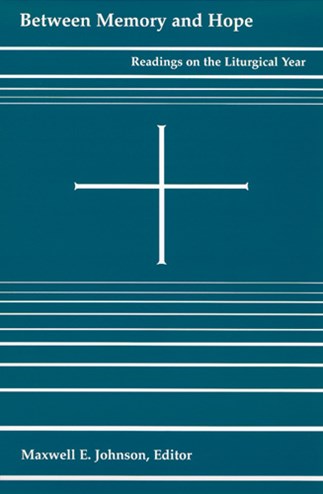 This anthology surveys the development and theology of the liturgical year in the order of its historical evolution: "From Sabbath to Sunday"; "From Passover to Pascha" (Lent, Holy Week, Easter, and Pentecost); and "From Pascha to Parousia" (Epiphany, Christmas, and Advent). In addition, introductory essays on the meaning of the liturgical year and a short concluding section on the sanctoral cycle ("From Parousia to Persons") are also provided.

While written as a companion to standard works in the field, beginning with graduate students in liturgy and seminarians, this book is intended for all—pastors, liturgists, catechists, religious educators—who seek to live according to the Church's theology of time as it is reflected in its calendar of feasts and seasons.

Through feast and fast, through festival and preparation, the liturgical year celebrates the presence of the already crucified and risen Christ among us today. Between Memory and Hope shows that to live between past and future, between memory and hope, is to remember Christ's passion as we encounter his presence among us now and as we await his coming again in glory.

Articles and their contributors are "The Liturgical Year: Studies, Prospects, Reflections," by Robert F. Taft, SJ; "Liturgical Time in the Ancient Church: The State of Research," by Thomas J. Talley; "Day of the Lord: Day of Mystery," by H. Boone Porter; "Sunday: The Heart of the Liturgical Year," by Mark Searle; "The Frequency of the Celebration of the Eucharist Throughout History," by Robert F. Taft, SJ; "History and Eschatology in the Primitive Pascha," by Thomas J. Talley; "The Origins of Easter," by Paul F. Bradshaw; "The Three Days and the Forty Days," by Patrick Regan, OSB; "The Veneration of the Cross," by Patrick Regan, OSB; "Holy Week in the Byzantine Tradition," by Robert F. Taft, SJ; "The Origin of Lent at Alexandria," by Thomas J. Talley; "Preparation for Pascha? Lent in Christian Antiquity," by Maxwell E. Johnson; "The Fifty Days and the Fiftieth Day," by Patrick Regan, OSB; "Making the Most of Trinity Sunday," by Catherine Mowry LaCugna; "Constantine and Christmas," by Thomas J. Talley; "The Origins of Christmas: The State of the Question," by Susan K. Roll; "The Appearance of the Light at the Baptism of Jesus and the Origins of the Feast of Epiphany," by Gabriele Winkler; "The Origins and Evolution of Advent," by Martin J. Connell; "On Feasting the Saints," by John F. Baldovin, SJ; "The Marian Liturgical Tradition," by Kilian McDonnell, OSB; "Forgetting and Remembering the Saints," by James F. White; "The One Mediator, the Saints, and Mary: A Lutheran Reflection," by Maxwell E. Johnson; and "The Liturgical Year: Calendar for a Just Community," by John F. Baldovin, SJ.

Maxwell E. Johnson, PhD, is an ordained pastor in the Evangelical Lutheran Church in America, and associate professor of liturgy at the University of Notre Dame. His articles have appeared frequently in Worship. He is the author of Living Water, Sealing Spirit and The Rites of Christian Initiation: Their Evolution and Interpretation published by The Liturgical Press.

. . . a helpful, challenging, and worthwhile book. There is something for just about everyone . . .
Liturgy Network

The present collection of essays on liturgical time represents the best writings of current liturgiologists on the topic. . . . [A] must as a companion to Thomas Talley's The Origins of the Liturgical Year or Adolf Adam's The Liturgical Year.
Michael S. Driscoll, University of Notre Dame