Treasures from the Storeroom

Medieval Religion and the Eucharist 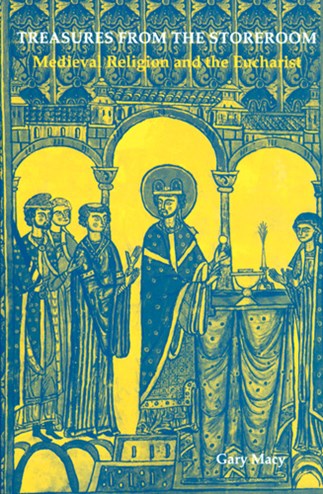 Do we really know about religion in the Middle Ages? Gary Macy suggests that what most people believe about the Church of the Middle Ages is actually wrong or founded on the perspective of one figure, Aquinas. Now, after two decades of research, Macy explores the truth about medieval religion and the Eucharist in Treasures from the Storeroom, an intriguing look into the forgotten areas of our Christian heritage. Using a wide range of original sources for these articles, Macy discusses such topics as theology, devotion, ecclesiology, and historical methodology.

This collection of eight essays provides an important backdrop to the plenary address, "The Eucharist and Popular Devotion," presented at the 1997 national convention of the Catholic Theological Society of America (CTSA), since several themes raised in that address are actually summaries of the fuller arguments presented in these articles. By presenting them here as a whole in the form of a book, Macy offers readers a clearer, more systematic look at the themes raised in that address.

As comforting as it may be for today's theologians (and others) to pick and choose from the past so that history conveniently leads to their own favorite conclusions, Macy suggests that the Churchs true tradition is diversity. Writing to fellow scholars, he offers Treasures from the Storeroom as a text for classroom use and as simply interesting reading.

The chapters in Treasures from the Storeroom are Introduction to The Theologies of the Eucharist in the Early Scholastic Period. A Study of the Salvific Function of the Sacrament According to the Theologians, c. 1080-c.1220, The Theological Fate of Berengars Oath of 1059. Interpreting a Blunder Become Tradition, Reception of the Eucharist According to the Theologians: A Case of Diversity in the 13th and 14th Centuries, Berengars Legacy as Heresiarch, The Dogma of Transubstantiation in the Middle Ages, Demythologizing the Church in the Middle Ages, Commentaries on the Mass During the Early Scholastic Period, and The Eucharist and Popular Religiosity.

Gary Macy, PhD, teaches at the University of San Diego and is widely published in the areas of medieval theology and devotion.

This book is a scholar's delight! Working expertly with a wide range of original sources, Macy recreates the discussion about Eucharist that actually took place in the Middle Ages. His careful historical research challenges many of todays theological presuppositions and provides a genuinely traditional base for new understandings and celebrations of Eucharist.
Bernard Cooke

These essays are 'must reading' for anyone serious about medieval theology, as well as for those seriously interested in ecclesiology and eucharistic theology, past or present.
Terrence W. Tilley, Chair, Department of Religious Studies, University of Dayton

In addition to being fascinating reading, Macy's work shows the liturgical reader that within the storeroom of history, peoples, beliefs and cultures which we call Catholicism there has long existed an array of liturgies and theologies that have been accepted as permanent, indispensable and enriching expressions of her practice and faith.
Centro Studi S. Anselmo, Liberia  Editrice, Roma, Italy

A collection of wonderfully written, fresh essays by a superlative scholar who proves the preeminence of historical theology and the hyra-headed character of Catholic tradition.
The Catholic Journalist

Gary Macy has lovingly blown the dust off theologians and documents, ideas and beliefs, and added light, that we may truly see the treasures of this time.
Australian Biblical Review

More than just a collection of previously published papers, this volume reflects, and makes easily available, the path-breaking research and reflection of our leading authority on the history of medieval Eucharistic theology and devotion. . . . Macy's work also sheds light on the actual dynamics of the development of doctrine in the medieval period itself. On all counts, this accessibly written book should attract a wide readership.
Marcia L. Colish, Frederick B. Artz Professor of History, Oberlin College

. . . essential reading for anyone who would try to teach or to understand the history of eucharistic theology.
Modern Believing

. . . a very learned book, displaying a confident mastery of original, and sometimes little-known sources. It is also an entertaining book, enlivened by flashes of wit . . .
Worship