On the Historical Development of the Liturgy 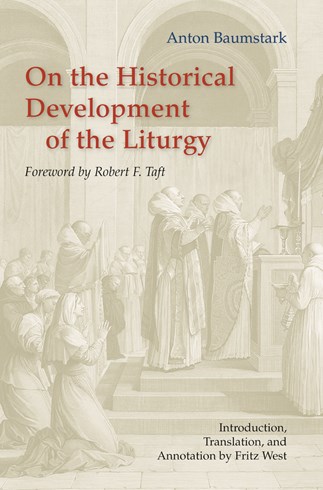 This book was written for one audience and valued by another. Written to lead adherents of the nascent German liturgical movement to a deeper religious appreciation of Catholic worship, its methodology and scope have won the appreciation of liturgical specialists for nearly a century. In describing the organic growth of the liturgy, its shaping and distortion, Baumstark’s reach extends from India to Ireland, Moscow to Axum, Carthage to Xi’an. He discusses the influences of language, literature, doctrine, piety, politics, and culture. While his audacity can be breathtaking and his hypotheses grandiose, his approach is nevertheless stimulating. In this annotated edition, Fritz West provides the first English translation of this work by Anton Baumstark.

Trained in classical and oriental philology, Anton Baumstark (1872ΓÇô1948) was prodigious as a scholar studying the literature, art, and liturgy of the whole church’Oriental, Eastern, and Western. Comparative liturgy, his method for studying the historical development of the liturgy as an organism, has had a lasting influence, notably on the liturgical study of the Christian East. Fritz West, a liturgical scholar ordained in the United Church of Christ, has written numerous articles on liturgical methodology, the three-year lectionary, and worship in his Reformed tradition. He has published two books, The Comparative Liturgy of Anton Baumstark and Scripture and Memory: The Ecumenical Hermeneutic of the Three-Year Lectionaries.

Anton Baumstark is a monumental figure of liturgical scholarship of the twentieth century. This English translation by Fritz West of [On the Historical Development of the Liturgy] . proves that he still demands serious attention.. West has rendered Baumstark's difficult and infelicitous German writing style into readable and, in many cases, elegant English prose. West, an ordained minister of the United Church of Christ, makes his own extraordinary contribution to liturgical research in this translation and annotation of Baumstark's early work. He is to be congratulated for his accomplishment.
L. Edward Phillips, Worship

Fritz West, himself a methodological master of comparative liturgical study, has provided all of us with a great service in the publication of his excellent translation of Anton Baumstark's work. Together with Baumstark's classic Comparative Liturgy, which set the methodological agenda for most of contemporary historical-liturgical study, English scholars and students now have another significant Baumstark work on method at their disposal. Not to be overlooked are the fine contextual introduction by West and the preface by the great Eastern liturgiologist in the Baumstark school, Fr. Robert Taft, SJ. This book demonstrates beyond a shadow of a doubt that Baumstark's foundational methods of Liturgiewissenschaft, also known as `comparative liturgy,' have a bright future indeed if we are to say anything at all about the history of liturgy.
Maxwell E. Johnson