Rule of Prayer, Rule of Faith 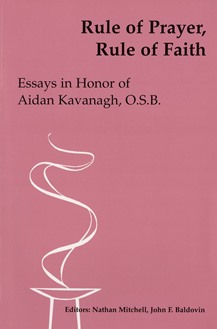 Aidan Kavanagh, O.S.B., is one of the most influential liturgists of the postconciliar period. This volume honors and highlights his contributions as a teacher, writer, and researcher in liturgics by bringing together historical and theological essays by specialists with international reputations, such as Robert Taft (Eastern liturgies), Kenneth Stevenson and Paul Bradshaw (Anglican liturgy; early Christian liturgical history), James F. White (North American liturgical history), and R. Kevin Seasoltz (the impact of postconciliar reforms within Roman Catholicism).

In a distinguished career spanning four decades, Father Kavanagh launched the doctoral program in liturgical studies at the University of Notre Dame, supervised the creation of its Center for Pastoral Liturgy, and was professor of liturgics at Yale Divinity School for more than twenty years. His books The Shape of Baptism(1-978) and On Liturgical Theology (1984) are modern classics.

A Festschrift designed to celebrate Kavanagh's seminal contributions to liturgical studies, this volume is a collection of essays by fifteen colleagues, friends, and former students. Its contents and authors are ecumenical, representing research by Roman Catholic, Anglican, and Methodist scholars. Its historical range is broad, covering liturgical issues in the early Christian, medieval, and Reformation periods, as well as topics related to the Restoration in seventeenth-century England, and twentieth-century reforms. An annotated bibliography of Father Kavanagh's work is also included.

These essays will interest students, members of theology or religious studies departments (in colleges and seminaries, Catholic and Protestant), and other liturgy professionals (directors of diocesan offices, directors of religious education, and directors of catechumenate programs in larger parishes). It's also an ideal addition to any college, university, or seminary library.

Contributors and their articles are:

John F. Baldovin, SJ, is professor of liturgy at the Jesuit School of Theology, Berkeley, California.