The Celebration of the Eucharist

The Origin of the Rite and the Development of Its Interpretation 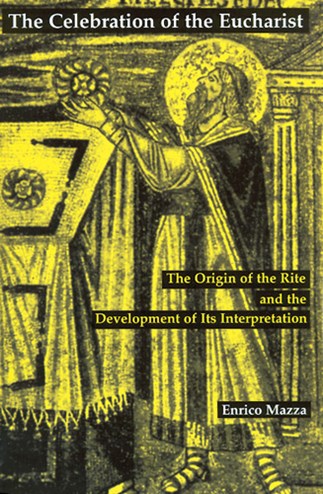 Beginning with the Last Supper, Father Mazza weaves his way through interpretations elaborated by the Fathers of the Church and medieval writers to provide the rich tapestry of concepts and categories adopted by Vatican Council II. Complete with an appendix including Jewish texts and early Eucharistic Prayers, abbreviations, bibliography, and notes, The Celebration of the Eucharist is a comprehensive source for those who have an interest in the theology of the Eucharist in the course of history.

Chapters are "Old Testament Sacrifices and Ritual Meal," "The Origin of the Christian Eucharist," "From the Jewish Liturgy to the Christian Eucharist," "Primitive Anaphoras: From the Didache to the Mystical Eucharist," "Primitive Anaphoras: Developments of the Eucharistic Liturgy," "Thematic Developments in the Eucharistic Liturgy," "The Early Patristic Period," "Tertullian and Cyprian," "The Fourth Century," "The Early Middle Ages," "The Scholastic High Middle Ages," "The Eucharist and the Relics of the Saints," "The Reformation and the Council of Trent," "The Liturgical Reform of Vatican Council II," "The Implementation of the Liturgical Reform," "The Parts of the Eucharistic Prayer," and "The Last Supper and the Church's Eucharist."

Enrico Mazza is professor of liturgical history at the Università Cattolica del Sacro Cuore in Milan. He is the author of Mystagogy: A Theology of Liturgy in the Patristic Ages, Eucharistic Prayers of the Roman Rite, and The Origins of the Eucharistic Prayer published by The Liturgical Press.