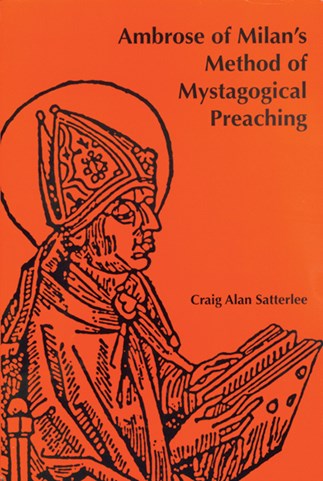 Mystagogy, or sustained reflection on baptism and the Eucharist, is the method of postbaptismal catechesis used in the R.C.I.A. In Ambrose of Milan's Method of Mystagogical Preaching, Craig Satterlee provides a method of mystagogical preaching for today's Church by looking at the sermons of Ambrose of Milan.

Confronted by a culture that increasingly cannot be counted on to reinforce the Christian faith or participate in the formation of Christians, the Church today questions the nature of the connection between Word and Sacrament, and liturgy and mission. In addressing these same questions, the catechumenate of the early Church took seriously that they lived in a culture at odds with the faith, particularly the period of mystagogy which is characterized by sermons that probe the rites of initiation. Their biblical importance for Christian life, continues to hold great potential for the Church today. However, it remains largely undefined.

By asking such questions as, what did Ambrose do and how did Ambrose do it? Satterlee explains that the best way to learn to preach mystagogically is by using a fourth-century mystagogue as our guide. In chapter one Satterlee establishes the need for mystagogy. Chapter two lays out the historical context of Ambrose and his church. Chapters three through eight are a series of six historical studies on Ambrose and his church that correspond to the components of a homiletic method. Chapter nine proposes a method of mystagogy for the contemporary church based on Ambrose's preaching. A brief biography of Saint Ambrose, history of the church of Milan, and a look at patristic exegesis are also included.

Modeled after William Harmless's Augustine and the Catechumenate, Ambrose of Milan's Method of Mystagogical Preaching serves as a companion volume to that work. Chapters are "'You saw what is seen, but not what is done': The Need for Mystagogy;" "'Having been renewed by baptism, hold fast to the style of life that befits those who have been washed clean': Setting the Stage;" "'I yield to my desire to teach': Ambrose: The Preacher;" "'This family clothed in white': The Newly Baptized of Milan: The Listeners;" "'I shall begin now to speak of the sacraments which you have received': Initiation in Milan: The Text;" "'Gather from the holy scriptures': Interpreting the Rites;" "'Milky speech': The Shape of Mystagogy;" "'But now my voice grows weak and time is running out': Mystagogy as Proclamation Event: Delivery;" "'We too are not without discernment': Discerning a Method of Mystagogical Preaching."

Craig A. Satterlee, PhD, an ordained minister of the Evangelical Lutheran Church in America, is assistant professor of homiletics and co-director of the Doctor of Ministry program at the Lutheran School of Theology at Chicago. He is a contributing author of Worship, published by The Liturgical Press.

More than an excellent historical study, Satterlee's work makes Ambrose a contemporary teacher in the development of a model for mystagogy today. Indeed, Ambrose comes to life in these pages as bishop, theologian, liturgist, and, above all, as preacher and proclaimer of the Mysteries. Liturgists, catechists, and especially preachers will find this work stimulating, challenging, and highly useful in their work.
Maxwell E. Johnson, University of Notre Dame

Satterlee's work is an excellent addition to historical studies on the practice of corporate discipleship and the preaching method in the early church. Satterlee's work is noteworthy for its unique contribution to patristics and homiletics. It should also stimulate significant discussion over the process of spiritual pedagogy as the church seeks to develop more effective ministries for the twenty-first century.
Bibliotheca Sacra

Satterlee convincingly demonstrates that Ambrose, Bishop of Milan, was both a great thinker and a sensitive pastor. The mystagogical preaching as sustained reflection on the rites of initiation' that Ambrose employed in the fourth century is still applicable for the present age. In the final analysis, Satterlee becomes like the one he studieda highly skilled mystagogical preacher. In a time when good preaching is desperately needed, this book is most opportune.
Michael S. Driscoll, University of Notre Dame

Ambrose of Milan's Method of Mystagogical Preaching should appeal to all who are interested in the early church, especially the Latin-Western church, to preachers, ministers, seminary students, and those involved in all aspects of Christian formation. It is an especially good resource for those working in RCIA, since it provides many in-depth insights into the sacramental and historic background of the sacrament of initiation.
Pro Ecclesia

The most exciting thing about the study of liturgy is the unity of past history and present practice. Pastor Satterlee shows, by careful analysis of the preaching and teaching of St. Ambrose, just how relevant the methods and message of that fourth century bishop are to twenty-first century pastors. The making of new Christians is the task of each generation but we accomplish it best by knowing what those before us have already discovered. This is a clear and vivid account of St. Ambrose's methods in initiating new Christians.
James F. White, University of Notre Dame

This is a solid and useful study that serves more than academic interests.
Theological Studies

. . . demonstrates, with clear and engaging style, how cardinal this mystagogical period was . . .
Worship