The Living Language of Christian Worship 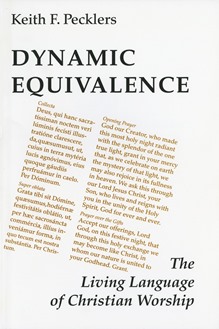 In studying the history of the vernacular in worship beginning with the Christian Scriptures, Dynamic Equivalence uncovers the power of a living language to transform communities of faith.

How we pray when we come together for common worship has always been significant, but the issue of liturgical language received unprecedented attention in the twentieth century when Latin Rite Roman Catholic worship was opened to the vernacular at Vatican II. Worshiping in one's native tongue continues to be of issue as the churches debate over what type of vernacular should be employed.

Dynamic Equivalence traces the history of liturgical language in the Western Christian tradition as a dynamic and living reality. Particular attention is paid to the twentieth century Vernacular Society within the United States and how the vernacular issue was treated at Vatican II, especially within an ecumenical context.

The first chapter offers a short history of the vernacular from the first century through the twentieth. The second and third chapters contain a significant amount of archival material, much of which has never been published before. These chapters tell the story of a mixed group of Catholic laity and clergy dedicated to promoting the vernacular during the first half of the twentieth century. Chapter Four begins with a survey of vernacular promotion in the Reformation itself, explores the issue of vernacular worship as an instrument of ecumenical hospitality and concludes with some examples of ecumenical liturgical cooperation in the years immediately preceding the Council. The final chapter treats the vernacular debate at the Council with attention to the Vernacular Society’s role in helping with the implementation of the vernacular.

This book hits many targets and does it fair and square! It is technical, drawing together important evidence in a skillful, accessible way for students of all kind. It has sparkling clarity and a good eye for memorable quotations. . . . Keith Pecklers' love of liturgy and his zest for its study, seasoned with a sense of humor, makes the text immensely readable. I think that this is one of those books which all serious students of liturgy ought to read.
The Right Reverend Richard Garrard, Director of the Centre and the Archbishop of Canterbury's Representative to the Holy See, The Anglican Centre in Rome

. . . an excellent resource for understanding debates over translation.
NCR

Dynamic Equivalence responds to a key challenge of our time, and, indeed, of much of the history of the Church: how to speak the Word of Life in human words. Pecklers succinctly maps the struggles that have accompanied the Church's liturgical proclamation and celebration of the Word of Life. His map comes at an opportune time: liturgical language once again is contested terrain. Dynamic Equivalence provides much-needed signposts and offers hope by putting in context current contestations.
Teresa Berger, Divinity School, Duke University, Durham, North Carolina

In this timely book, Pecklers splays open the tradition to reveal an amazing pluriformity around issues of the vernacular. His telling of the 20th century debate culminating in Vatican II is compelling narration sustained by first rate archival research. Those of us concerned with issues of language, vernacular and translation are deeply indebted to him for this broad ranging, accessible and crystalline work.
Edward Foley, Capuchin, Professor of Liturgy and Music, Catholic Theological Union, Chicago, Illinois

The book gives a helpful and detailed history of language in worship, the trials of Cyril and Methodius; the different approach by the eastern churches; the need for participation in the liturgy as primary spiritual formation, and for catechesis coming from scriptures readily understood.
Joseph T. Nolan, Boston College

Anyone who thinks the use of the vernacular in the liturgy was an invention of the bishops at Vatican Council II must read this book to understand what led up to that decision. It also shows how, with prayers and persistence, a populous movement for change in the Catholic Church can finally be effective.
Most Reverend Rembert G. Weakland, O.S.B., Archbishop Emeritus of Milwaukee

Keith Pecklers is an expert guide to charting the historical background; but he comes into his own in unraveling the lobbying and maneuvering around the time of the Council. Here his work reads almost like a detective story, a detective story that has a continuing life, as the events of recent years have disclosed. Anyone interested in a worked example of how the Roman Catholic Church tries to balance its historic commitment to be the church universal with a genuine desire to engage in serious mission locally should read this book.
David Stancliffe, Bishop of Salisbury, Chairman of the Church of England Liturgical Commission