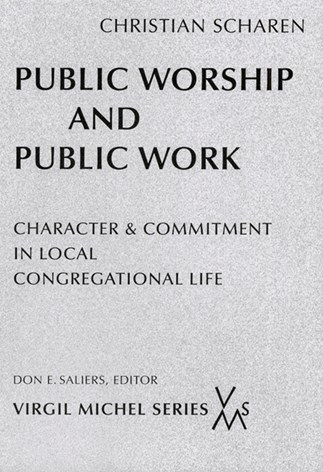 In a time of increasing cultural pluralism and vast religious restructuring in the United States, Christian social ethics must take account of how values and commitments shape Christian communities. In Public Worship and Public Work Christian Scharen examines theological claims about the relationship of worship and ethics by means of ethnographic study of the life, worship, and work of three vibrant congregations.

Public Worship and Public Work moves beyond two caricatures of the relationship between worship and social ethics. Rather than resolute portrayals of the Church as a reflection of its culture and context and causal accounts of the Church's liturgy forming a Christian witness over and against culture, this book lifts up congregational identity as an area of dynamic interaction between worship, social ethics, and culture.

Chapters in Part One are "Liturgy and Social Ethics: Characterizing a Debate," and "Sociologizing the Debate: Identity, Ritual, and Public Commitment." Chapters in Part Two, Three Case Studies in Atlanta's Old Downtown are " 'People Living Church': The Catholic Shrine of the Immaculate Conception," ''Jesus Saves:' Big Bethel African Methodist Episcopal Church,'" and "The Church at Work': Central Presbyterian Church.'" Part Three concludes with "The World in the Church in the World."

Christian Scharen, PhD, is associate director of the Yale Center for Faith and Culture at Yale Divinity School in New Haven, Connecticut.

This is a helpful book which adds thought-provoking insight into the way churches, and people in churches, involve themselves in the community. Worship is not discarded here in favor of social influences but rather is viewed as affecting people in the midst of and in conjunction with the many conditions that influence human beings 'in the world.' The examination of these complexities and the resulting model for study are useful additions to how we view the connection between liturgy and ethics. The descriptions of the congregations are compelling works in themselves.
Catholic Studies

What difference does it make for the persons we become and the society we shape whether and where we pray, what we pray for, and how we worship together? This lovely, masterly work reveals how liturgy animates moral character and inspires civic commitment in three distinctive downtown churches. In living color it sheds brilliant new light on these axial mysteries at the crossroads of practice theory and virtue ethics, moral theology and liturgics, congregational studies and the dramaturgic study of religion. Amen!
Steven M. Tipton, Emory University, Co-Author, Habits of the Heart