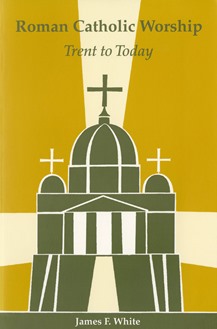 A great deal has happened in Roman Catholic worship since Vatican II promulgated the Constitution on the Sacred Liturgy on December 4, 1963. But the myth persists that very little happened in the four centuries between the end of the Council of Trent on December 4, 1563, and Vatican II. Roman Catholic Worship explores what occurred in those four hundred years before Vatican II and how the stage was set for all the changes that have come about since the council. It may be true that liturgical texts were frozen during those intervening centuries, but to assume that liturgical texts are the whole of liturgy is questionable. James White demonstrates that the worship life of Roman Catholicism was in constant transition during this entire period despite the intransigence of liturgical texts.

James F. White, Ph.D., is the Bard Thompson Professor of Liturgical Studies at Drew University and a visiting professor at Yale University. He has published nineteen books, chapters in forty-six other books, and over a hundred articles. His first edition of Roman Catholic Worship won the 1996 First Place Book Award from The Catholic Press Association.

This remains an important work. Any liturgical bookshelf that is bare of the first edition should exhort its owner to secure a copy of the second. The book deserves consideration by church leaders engaged in the current liturgy debates, liturgical teachers and historians who are more often than not focused on the medieval period, and readers in general seeking insight into our immediate history and current mindset.
Pacifica