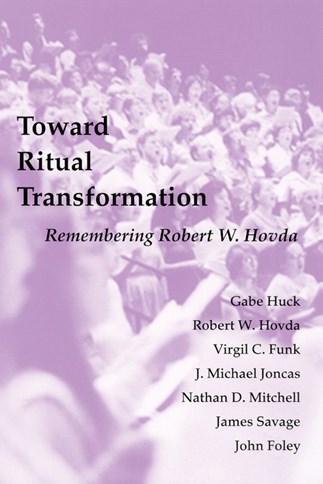 In Toward Ritual Transformation renowned liturgist Robert W. Hovda, and other distinguished liturgists who have followed his lead, challenge the Church to continue a pilgrimage toward beauty and justice, the inseparable components of Christian liturgy and life.

Father Hovda's bishop once accused him of having a "messiah complex." Hovda replied: “I thought we were supposed to.” Hovda’s “messiah complex” was the idea of a church “never finalized or finished, never an accomplished fact but always on pilgrimage, seeking, growing, and helping the world grow toward what Scripture calls the reign of God. This faith community comes to realize gradually, with the help of the Word of God and the signs of the times, that its ministry in the world is the liberation and unification of the human race, because the God of the Bible is a God who is living, whose creative work is ongoing, and whose call beckons us always to move beyond where we are at any given moment.”

Essays and their contributors are “A Tree Planted by a Stream,” by Gabe Huck; “The Sacred: Silence and Song,” by Robert W. Hovda; “Liturgical Prayer: Twenty-five Years of Change,” by Virgil C. Funk; “Ritual Transformations: Principles, Patterns, and People,” by J. Michael Joncas; “Being Beautiful, Being Just,” by Nathan D. Mitchell; “The Transforming Power of Music: Tales of Transformation,” by James Savage; and “All at Once the Music Changed,” by John Foley, S.J.

Robert W. Hovda, served as presbyter of the diocese of Fargo until his death in 1992. His article is based on an address that he delivered during the 1982 NPM Regional Convention in Providence, R. I.

Gabe Huck, writer and lecturer, served on the staff of The Liturgical Conference with Father Hovda. From the late 1970s until July 2001, Huck directed Liturgy Training Publications in Chicago.

Virgil C. Funk, a presbyter of the Diocese of Richmond, is the founder and president-emeritus of the National Association of Pastoral Musicians.

Nathan D. Mitchell is the associate director for research at the University of Notre Dame Center for Pastoral Liturgy. He is a writer for and editor of Assembly and Liturgy Digest.

James Savage is the director of music ministries at St. James Cathedral, Seattle. He is also a distinguished visiting artist at the University of Washington and a Fulbright Fellow in liturgical music.

J. Michael Joncas is assistant professor of theology at the University of St. Thomas, St. Paul, Minnesota. He holds liturgy degrees from the University of Notre Dame and the Pontifical Liturgical Institute. He has served in parish work and campus ministry and is a composer and editor of liturgical music.

Captures well the challenging spirit of Hodva's life and commitment to the transforming power of liturgical reform.
Worship