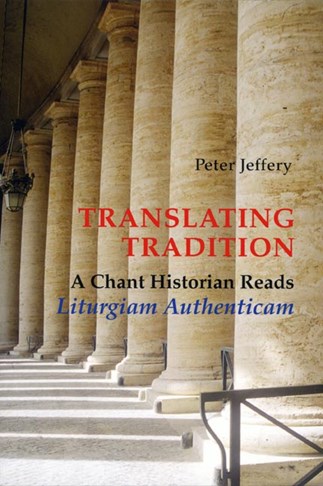 Liturgiam Authenticam, issued by the Congregation for Divine Worship and the Discipline of the Sacraments in 2001 has provoked much comment, both positive and negative, from many people involved with the liturgy.

Translating Tradition reprises a four-part series by Dr. Peter Jeffery, Obl.S.B., that appeared in the journal Worship in 2004. Jeffery conducts a thoughtful and respectful reading of Liturgiam Authenticam, to identify core principles, understand what the document is really saying and relate it to other church teaching.

Chapters areThe Latin Liturgical Traditions, The Bible in the Roman Rite," "Languages and Cultures," and "Human and Angelic Tongues."

Peter Jeffery, OblSB, PhD, is the Scheide Professor of Music History at Princeton University. He is the author of A New Commandment: Toward a Renewed Rite for the Washing of Feet published by Liturgical Press.

This book is a necessary resource for scholars, translators, and all those concerned with new texts in the Roman Rite. . . . With excellent documentation and penetrating analysis, Peter Jeffrey has provided a valuable and important wok. Highly recommended.
Parish Liturgy Magazine

I found this book both valuable and refreshingly stimulating.
Music and Liturgy

In this study, Peter Jeffery searches out the core concerns of Liturgian Authenticam, and submits them to close scrutiny. As one steeped in the history of the Western liturgical tradition, he uncovers some shallow thinking in the document, and raises the question of whether the authors have imagined or invented an ideal `Latin Rite'. At the same time, he endorses what he identifies as the underlying concern to restore dignity and solemnity to modern Roman Catholic liturgical practice. This book is crucial reading for those concerned with Western liturgical evolution and the possible course of future revision.
Bryan D. Spinks, Professor of Liturgical Studies, Yale Divinity School

In this wonderful and challenging commentary from a diversity of perspectives (liturgy, music, linguistic, and cultural) Peter Jeffrey has provided us with a superb and much needed analysis of the controversial document, Liturgiam Authenticam. This should be required reading for all who seek a balanced approach to the questions and implications surrounding and arising from the translation of liturgical texts. Clearly a `must read' for all students of liturgy
The Rev. Maxwell E. Johnson, University of Notre Dame, Notre Dame, Indiana