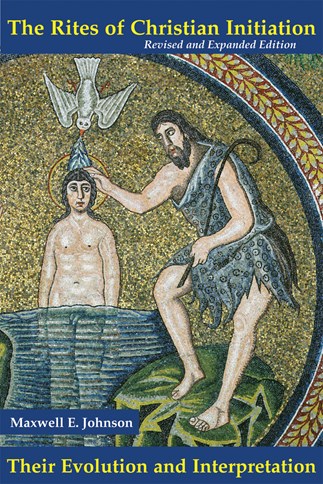 Their Evolution and InterpretationRevised and Expanded Edition
Maxwell E. Johnson

Max Johnson has done it again. If you have room in your library for only one reference book on initiation, this is the one to choose. . . . This revision paints and even broader, deeper, and therefore even more complex picture of how Christians have ritualized and understood Christian identity and the making of Christians.
Celebrate


Those who know Max Johnson's work in the area of sacramental initiation need no introduction to this new edition of The Rites of Christian Initiation. In fact, they probably already own it. The 1999 edition was the definitive work on the history and theology of the liturgical rites of initiation and a major contribution to their spirituality. It has been widely used as a textbook, and I am sure that those who have used it have found its clarity and insights as challenging as I have. The new edition, with extensive updating and rewriting, is even better. . . . The book is indispensable for anyone interested in sacramental initiation.
Catholic Books Review


The first edition has already established itself as the standard history of the rites of initiation, and the updating in this second edition will further enhance its reputation.
Rev. Paul Bradshaw, PhD, Professor of Liturgy, University of Notre Dame


[A] necessary reference book for every initiation ministry team. . . . This book will offer helpful insights to those open to history and the wisdom of diverse communities within the Church. It's perfect for those who know it's time for a personal update-and this book highlights the fact that it is indeed time for most of us-or for use in any initiation course that goes beyond the surface of what is in the current liturgical books.
Celebrate


No Catholic library should be without this revised and expanded version of The Rites of Christian Initiation: Their Evolution and Interpretation.
Catholic Library World


By adopting Maxwell Johnson's The Rites of Christian Initiation as the standard text for courses liturgy professors across the English speaking world have recognized the author as among the premier liturgical scholars. Johnson is especially competent in the early period. The revised version has substantial additions: chapters for both East and West in the ante-Nicene period, including new material on the Odes of Solomon; new material on the Cappadocians; a new chapter on all of the seven living Eastern Christian traditions (available nowhere else); the chapter on the modern period now includes the new rites of the Evangelical Lutheran Worship (ELCA), and Lutheran Service Book (Missouri Synod) together with more recent scholarship on the RCIA. This makes it the most up to date and comprehensive book on the rites of initiation.
Kilian McDonnell, OSB, Saint John's Abbey, Collegeville, Minnesota


Used as a textbook in university undergraduate and graduate religious studies programs, the work is accessible and informative to any reader interested in a historical perspective on Christian initiation rites.
Midwest Book Review


If you think Maxwell Johnson has already written the definitive book on the history of Christian initiation rites, you are right. But now he has made it better. A revised and expanded edition is only necessary because scholars have new insights into the history of these rites, and because their contemporary celebration continues to develop.Johnson has written a textbook case of writing good textbooks: clear in organization, generous in quoting sources, precise in analysis, and provocative in expositing contemporary theological issues. Maxwell Johnson is a mystagogical Titan at the top of his form.
Paul Turner, STD, Author of When Other Christians Become Catholic (Liturgical Press)