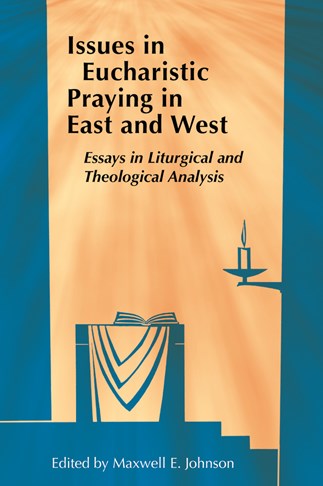 Issues in Eucharistic Praying in East and West

This collection provides several "state of the question" essays on current research in a variety of Eucharistic prayers in the Churches of East and West, including attention to other issues of Eucharistic praying and theology. In addition to essays by already recognized scholars in the field, this collection also introduces readers to a new generation of liturgiologists who are emerging within the academy as notable contributors to the field of liturgical studies.

For students and teachers of liturgy, indeed, for all who seek solid and up-to-date scholarship on Eucharistic liturgy and theology, this volume offers an ecumenical guide from New Testament texts through Addai and Mari, the so-called Apostolic Tradition, and Roman Canon, through the diversity of Eastern and Oriental Orthodox anaphoras, up to and including the sources for the prefaces of the Missal of Paul VI. Close attention is also given to questions such as the origins of the Sanctus, Eucharistic consecration, as well as other historical and theological questions from within Eucharistic praying.

Maxwell E. Johnson is professor of liturgy at the University of Notre Dame. Among the several titles he has written or edited are The Rites of Christian Initiation: Their Evolution and Interpretation (2007) and American Magnificat: Protestants on Mary of Guadalupe. He is also a frequent contributor to and an editorial consultant for Worship.

'It is to be hoped that these essays will become required reading for students of liturgy. (from the introduction)' I heartily concur. This extremely rich collection of essays represents the best and most up-to-date scholarship on Eucharistic praying-past and present, and east and west. It is filled not only with insight into the historical development of the Christian tradition, but also with serious implications for contemporary theology and church practice. Hats off to Maxwell Johnson and his collaborators.
John F. Baldovin, SJ
Professor of Historical & Liturgical Theology
Boston College School of Theology and Ministry


We are the richer for this extremely valuable book as it will be `the next generation.
Worship


The Notre Dame school of Liturgical Studies stands at the cutting edge of the discipline, and Prof. Maxwell E. Johnson, disciple and alter-ego of Prof. Paul F. Bradshaw, has long been one of its most respected protagonists. This collection of in-depth essays, worthy successor to Bradshaw's 1997 Essays on Early Eastern Eucharistic Prayers, expands the horizon to include research on recent issues in liturgical history and theology across the East-West divide: the ghost of Lietzmann reappears as eucharistic origins are revisited, and the acrimonious Catholic debate over the Vatican's 2001 recognition of the East-Syrian Anaphora of Addai and Mari, the rich ongoing research on the Anaphora of St. Basil, the never-ending debate on the provenance of the anaphoral Sanctus-to mention but a few-are all competently and fully reviewed, proving the topical importance of this anthology. And Johnson's excellent introduction provides a careful guide to its riches, which o theological library can henceforth be without. For Johnson's summary of his book's purpose (p. xv) is perfectly fulfilled: ` . . . one of the primary goals of this volume has been to offer an update on the state of the question on various Eucharistic prayers today and, as such, it is hoped that these essays will become required reading for students of liturgy.' Amen to that!
Robert F. Taft, SJ, FBA
Fellow of the British Academy
Professor Emeritus of Oriental Liturgy
Pontifical Oriental Institute, Rome


When is the moment of consecration? Can there be a consecration without a priest saying the words, 'This is my body; this is my blood'? How did the eucharistic prayers evolve? Why do we sing the Sanctus every Sunday? Do Eastern and Western Christians pray differently? What is the value of the liturgical texts added after the Second Vatican Council? How can people better appreciate the meaning of the eucharistic prayer? Maxwell Johnson has collected an exceptionally important series of essays on these and other timely topics. Absolutely every contribution will make you rethink assumptions of what Christians do when we gather for the eucharist. This illuminating book will bring you up-to-date and equip you to advance spiritual conversations, while enriching your own participation in the church's great prayer of thanksgiving.
Rev. Paul Turner
Pastor, St. Munchin Catholic Church
Cameron, Missouri