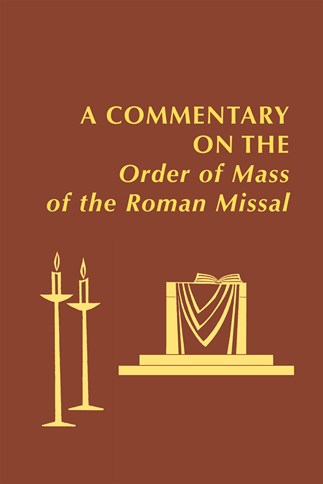 A Commentary on the Order of Mass of The Roman Missal: A New English Translation

A Commentary on the Order of Mass of The Roman Missal gathers the insights of some of today’s foremost English-speaking liturgical scholars to aid in understanding this most recent edition of the Order of Mass and its new English translation. Developed under the auspices of the Catholic Academy of Liturgy this commentary was guided by three primary concerns:

The volume is edited by

John Baldovin, SJ, Professor of Historical and Liturgical Theology at the Boston College School of Theology and Ministry

Edward Foley, Capuchin, the Duns Scotus Professor of Spirituality and Professor of Liturgy and Music at Catholic Theological Union in Chicago

Joanne Pierce, Associate Professor in the Department of Religious Studies at the College of the Holy Cross, Worcester, MA

The overall structure and concept is wonderful. It has the scholarly, the textual, the historical, but also, through the `mystagogical implications' sections, offers a solidly-based pastoral and catechetical element. The bibliographies in footnotes are excellent. The historical sections, in particular, bring together the best of contemporary scholarship and allow the reader to follow through on aspects by engaging with texts referenced in the notes. You have some of the best scholars looking at the various parts and elements. I have already introduced it to a liturgy student of mine who is working on his STL, and proposing strongly that he purchase his own copy.
Thomas R. Whelan, Associate Professor of Theology and Dean of the Faculty of Theology and Spirituality, Milltown Institute, Dublin


I highly recommend this Commentary and congratulate the Catholic Academy of Liturgy under whose auspices it was designed and produced. This scholarly work will assist in a serious study of the new Roman Missal.
Thomas A. Krosnicki, SVD, Worship


This Commentary is the fruit of years of collaboration on the part of a wondrous array of scholars.. Each and every one of the scholars involved in this project shares a deep commitment to ongoing liturgical reform in accord with the principles of the Second Vatican Council's Constitution on the Sacred Liturgy, Sacrosanctum Concilium. Thus, the sympathetic presentation of the Order of Mass in this volume is not uncritical but, rather, highlights in careful and insightful ways those questions and concerns requiring further reflection and discussion. It is a singular delight for me to offer my heartfelt affirmation and deep appreciation of the work of these scholars in their service of the liturgical life of the Church.
Cardinal Roger Mahony, Archbishop Emeritus of Los Angeles


An indispensable guide to the history and theology of the Order of Mass as found in the third post-Vatican II edition of The Roman Missal. A trustworthy resource for clergy, seminarians, directors of worship, pastoral musicians, and all charged with the prayerful implementation of the new English translation of this edition of The Roman Missal. A magnificent companion to the Catholic Academy of Liturgy's earlier commentary on the General Instruction of The Roman Missal, combining the finest contemporary liturgical scholarship with deep concern for pastoral implementation. Highest recommendation.
Fr. Jan Michael Joncas, Associate Professor of Catholic Studies, University of St. Thomas, St. Paul, MN


This is a marvelous resource for teaching, catechesis, and consultation, as well as an interesting and richly informative study for a broad audience of canonists, liturgists, theologians, students, clergy, and pastoral ministers.
John M. Huels, Studia Canonica


A wonderful reference work for all who want to find out more on the status quo of vernacular translations of the liturgical texts for the Eucharist after Vatican II. [It] offers a level of research and methodology heretofore unavailable. This alone is reason enough to wish this volume wide distribution.
Martin Stuflesser, Theological Studies


A Commentary on the Order of Mass of the Roman Missal is essential reading for every pastor, seminarian, liturgical planner, and interested parishioner of the congregation. This commentary is all-encompassing and considers every aspect of the newly translated liturgy and meticulously addresses the historical and theological developments of the Church's primary prayer.
Catholic Library World