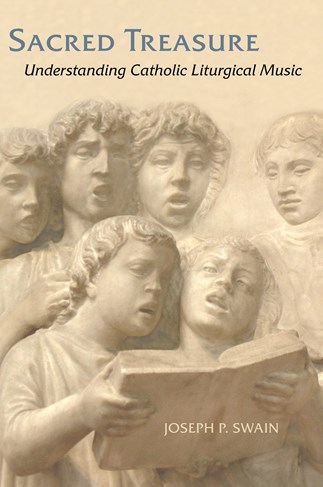 In the discussions and debates surrounding liturgical music of the past fifty years, music theorists, critics, and historians have contributed little, and their counsel has rarely been sought. Whenever the matter of liturgical music arises, most often in parishes, but sometimes in episcopal conferences or in the academy or in Vatican documents, the nature of the music, as music, almost never affects the discussion.

With Sacred Treasure, Joseph Swain, a distinguished musicologist and accomplished performer, attempts to change that. He offers a theory for building authentic traditions of liturgical music for Roman Catholic parishes. This book is an exercise in pragmatic music criticism. By providing a rational basis for evaluating the essential issues, Swain seeks to show how a spiritually wholesome stability might supplant the confusion.

Sacred Treasure shows how the hard facts of music must be taken into account in any holistic conception and any lasting form of liturgical music.

Joseph P. Swain is associate professor of music at Colgate University. He is the author of six previous books, most recently A Historical Dictionary of Sacred Music and Harmonic Rhythm: Analysis and Interpretation.

Joseph Swain is among the rare scholars able to make a cogent, compelling case based upon the intrinsic qualities of music, without relying upon highly technical descriptions available only to trained musicians. The trained musician will find much that is new and enlightening here, but the pastor, liturgist, theologian, choir singer, and layperson will be able to follow the argument as well.
William H. Mahrt, Professor of Music History, Stanford University, President, The Church Music Society

I could not recommend this book highly enough. It has all the popular appeal of Thomas Day's Why Catholics Can't Sing and the scholarly bent of Anthony Ruff, Michael Joncas, and Edward Foley. This is a must-read for all seminarians, priests, bishops, diocesan directors of liturgy, and musicians.
Msgr. M. Francis Mannion, Founding President of the Society for Catholic Liturgy