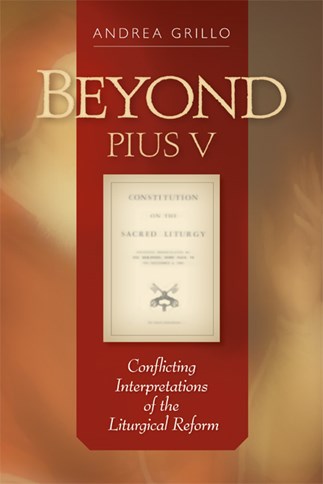 The reform of the liturgy is at risk, says Andrea Grillo. Recent developments have sown doubts and confusion within the church. While many authorities pay lip service to the importance of the liturgical reform that followed Vatican II and cite all the right documents, what they offer is "out of tune" with the fundamental reasons for the reform.

Grillo argues that the church today must refresh its collective memory of the essential meaning of the liturgical reform. For Grillo, this means understanding

Beyond Pius V is not simply a set of pastoral observations. It is a strongly argued theological essay on the true meaning and purpose of liturgy and liturgical reform. That reform, Grillo says, must continue to challenge and provoke us, never to be reduced to the precious past of our ancestors; rather, like children who honor the legacy of their parents, we are called to carry on and nurture the life of the reform.

Andrea Grillo is professor of sacramental theology at the Pontifical Atheneum of Saint Anselm in Rome. He is the author, coauthor, or contributor of many works of liturgical and sacramental theology in Italian. Beyond Pius V is his first book to be published in English.

Andrea Grillo's Beyond Pius V: Conflicting Interpretations of the Liturgical Reform is a bracing book! His passion and clear thinking have grabbed me by the lapels.
Paul F. Ford, Professor of Systematic Theology and Liturgy, St. John's Seminary, Camarillo, California


In these five short but passionately written chapters, Andrea Grillo emphasizes how urgent it is to transcend the paralyzing polemics of recent years, provoked by reform of the liturgy, and to face with openness and determination the more fundamental but forgotten or as-yet-unknown aspects of the liturgical vision of Vatican II and of the early twentieth-century thinkers whose amazing insights prepared for it without intending to do so. Barry Hudock deserves commendation for introducing one of Italy's most prolific and highly respected theologians to the English-speaking world in such a clear and readable translation.
Patrick Regan, OSB, Professor Emeritus, Pontificio Ateneo Sant' Anselmo


Andrea Grillo advances the debate on the liturgical reform with definitive evidence: despite the conflict of interpretations on Sacrosanctum Concilium and the motu proprio Summorum Pontificum of 2007, the theology of the liturgy of Vatican II remains a key part of the great and irrepressible reformulation of the church's understanding of itself at Vatican II.
Massimo Faggioli, University of St. Thomas


This is a contribution not to be overlooked by scholars and pastors.
Paul Philibert, OP, Worship


This book recalls for us the fundamental motives that led, with great effort, to the liturgical reforms of Vatican II. It is a timely reminder of forgotten truths of the liturgical movement, namely, that it was and is a question not only of reforming the liturgical books but of forming Christians themselves through profound and conscious participation in the liturgical rites and prayers. It provides conceptual tools for a deep theological consideration of the intentions of the reform as well as a way of confronting the theological questions that necessary emerge from Benedict XVI's motu proprio Summorum Pontificum.
Jeremy Driscoll, OSB, Pontifical Athenaeum Sant' Anselmo, Mount Angel Seminary