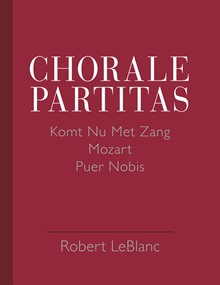 This fresh and new collection of chorale partitas by organist and composer Robert LeBlanc is sure to fascinate and charm both congregations and audiences alike. Written mostly at an intermediate to advanced level, these short variations serve well as both materials for liturgy as well as for the concert or recital stage. Hymn tunes included are KOMT NU MET ZANG ("What Is This Place"), MOZART ("Come, Sing a Home and Family"), and PUER NOBIS ("That Easter Day with Joy Was Bright").