The History of Mount Angel Abbey 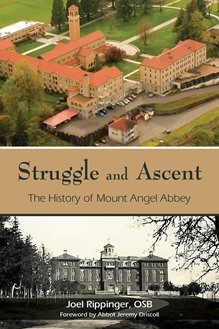 The history of religious institutions is too often stereotyped as devoutly formulaic, excising or overlooking the inherent drama in most community histories. This is especially the case with Mount Angel Abbey. In its almost 140 years of existence, it has known triumph and tragedy. The sacrifices of a founding generation were joined to the devastation of two fires. An initially insular community of Swiss monks became Americanized and expanded to Canada and Mexico. Despite periods of financial crisis and the occasional scandal, the momentum of a unique monastic culture left its mark. In many ways, Mount Angel's history is the history of a pilgrim Church, a steady and transformative sign of God's kingdom on earth. Includes black-and-white photos.

Father Joel Rippinger, OSB, is a monk of Marmion Abbey. With graduate degrees in history from the University of Notre Dame and in monastic studies from the Pontifical University of Sant'Anselmo in Rome, he has written extensively on Benedictine history and spirituality for the past forty years. He is the author of The Benedictine Order in the United States: An Interpretive History (Liturgical Press, 1990). He is a long-term member of the editorial board of the American Benedictine Review and a member and past president of the American Benedictine Academy. He continues to serve as formation director and director of oblates at Marmion Abbey and as instructor and faculty/staff chaplain at Marmion Academy in Aurora, Illinois.

"Fr. Joel Rippinger's latest contribution to American monastic history, Struggle and Ascent: The History of Mount Angel Abbey, presents a fascinating story in an engaging style. He situates well the 140-year history of the oldest Benedictine Abbey west of the Rockies within the context of both the history of the American Northwest and the history of the Church in the United States. What is especially attractive is the way Rippinger weaves biographical sketches of interesting community members and in-depth treatment of various works of the Abbey into the overall historical narrative. The framework of `struggle and ascent' enables him to treat head-on the missteps and scandals that occurred while finding good reason to affirm the resilience, the faith, and the contribution to the life of the Church in the Pacific Northwest that rightly characterizes the monks of Mount Angel Abbey through the decades."
Abbot Benedict Neenan, OSB, Conception Abbey, Conception Missouri

"Fr. Joel has condensed 140 years of Mount Angel Abbey's history into a well-constructed 190-page narrative. He situates abbey's story in the political and religious history of the Europe and North America. He has made very good use of monastic archives. I hope that his work inspires others to tell us more about the personalities and the material and spiritual history of this fascinating community."
Fr. Hugh Feiss, OSB, Monastery of the Ascension, editor of A Benedictine Reader: 530-1530

"Like living beings, monasteries seem to have their own genetic code, physical characteristics and personality traits. They represent a unique blending of history, geography, struggle and chance, along with the myriad influences of the people over the decades who walked through their doors. Mount Angel Abbey has a compelling story to tell, propelled by the fullness of its long life. Father Joel Rippinger's novelistic telling of that story gives this monastery the care and attention it deserves."
Judith Valente, OblSB, author of How to Live: What the Rule of St. Benedict Teaches Us About Happiness, Meaning, and Community; Atchison Blue: A Search for Silence, A Spiritual Home and A Living Faith; and The Art of Pausing

"As a protestant pastor and Benedictine oblate with Mount Angel, I've made regular pilgrim retreats every year up to Mount Angel Abbey over the past two decades. The vision from the hilltop reminds me of being at Monte Cassino, where Benedict wrote in the Rule that we ascend by descending along steps of humility. Following the steps and pages of this well-written historic narrative, through the many challenges and celebrations of life in community, we see anew the vision of Benedict's Rule lived out daily among the monks through lives of stability, fidelity, and obedience to Christ since the 1880s."
Rev. Dr. David Robinson, Oblate of Mount Angel Abbey, Author of Cloud Devotion: Through the Year with The Cloud of Unknowing, and Lead Pastor, Cannon Beach Community Church, Cannon Beach, Oregon

"In the footsteps of their monastic predecessors, Benedictines arrived in the Willamette Valley in 1882 to build up the church and culture through their prayer and work. Fr. Joel's narrative of Mount Angel Abbey vividly portrays the cross at the center of monastic life, manifesting its power through human weakness. Mount Angel, persevering through the flaws of its leaders and a multitude of calamities, such as fire, presents an image of the entire Church, stably standing on the mountaintop through all difficulties."
R. Jared Staudt, PhD, Archdiocese of Denver and Augustine Institute, author of The Beer Option

"Any person interested in monastic history would find this book fascinating and enlightening but so would those who are trying to find a way amidst the struggles in the Church today that allows them to move forward in faith and hope."
American Benedictine Review

"Rippinger's book is a welcome contribution to the story of American Catholicism and American Benedictine history in particular. With a keen historical sense and deftness of narrative style, the author tells the story of one monastery's faith-filled journey—the story of a community of men sometimes imperfect and broken, yet intrepid in their search for God, the pursuit of holiness, and service to the church. Mount Angel Abbey's story is not theirs alone. It belongs to the church and bears witness to the truth that transfiguration does not happen without risk and hope-filled perseverance. Struggle and Ascent is a work that affirms the `good news' of how God works in the church and in the world."
Ephrem Hollermann, OSB, author of The Reshaping of a Tradition: American Benedictine Women, 1852-1881

"This book tells the 140 year history of the Oregon abbey, and tells it within the monastic and cultural context which enhances the total picture of the abbey's life."
The American Monastic Newsletter