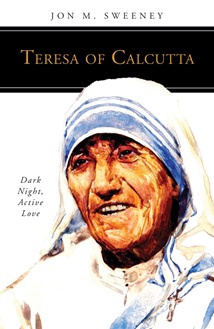 Most people living in the last quarter of the twentieth century knew Mother Teresa by name and appearance. They could also identify her as the saint of the gutters of Calcutta. Two years after her death, she was still recognized as “the most admired person of the century.” So, what is there still to say about her? Quite a bit, as it turns out. The story of both her public and private lives remains little known, and we continue to grapple with the extraordinary things she did, as well as the way that she interpreted the vocation of any would-be follower of Jesus.

This biography shows Mother Teresa as the first great saint of television. We came to know her on the screen, and, as such, we felt we knew her in a way that we could not have known the saints before her. Presented in three parts, this biography looks at the preparation, the call, and the legacy of the extraordinary woman whom Pope Francis named Saint Teresa of Calcutta in 2016.

Jon M. Sweeney is an award-winning author of over forty books, including The Complete Francis of Assisi; the People of God series biographies of James Martin, SJ: In the Company of Jesus and Nicholas Black Elk: Medicine Man, Catechist, Saint; and new from St. Martin’s Press and Penguin Random House Audio: Thomas Merton: An Introduction to His Life, Teachings, and Practices. He speaks regularly at literary and religious conferences, retreat and conference centers, and churches. Jon is a Catholic married to a rabbi. Their interfaith marriage has been profiled in national media. Living in Milwaukee, he writes regularly for America magazine and The Tablet, and he is also editor at large at Orbis Books.

" A superb brief introduction to the most important saint of our time."
James Martin, SJ, author of Learning to Pray and In All Seasons, For All Reasons

"Sweeney contributes something which has been sorely missing from the discourse surrounding Mother Teresa in recent years—nuance and context. It is refreshing to finally read an account of Mother Teresa's full humanity—her complexity and her sainthood. Sweeney captures the life and spirituality of one of the most influential religious voices of the twentieth century, refusing to reduce reflections on her inner life to clichés and platitudes."
Emilie Grosvenor, PhD Candidate, Centre for the Study of Religion and Politics, St. Mary's College, University of St. Andrews