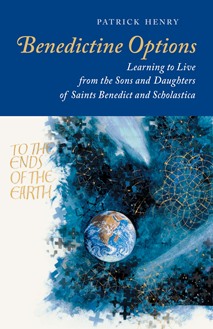 "Here is a vigorous, optimistic exposition of the contemporary Benedictine charism. This is a book for which we should all be grateful. It makes for energizing and encouraging reading. Written equally for monastic and non-monastic, we are given a survey which shows the development and expansion of Benedictine options in today's world."
Esther de Waal, author of The Way of Simplicity


"Patrick Henry's new book expands the growing literature on living the Rule of St. Benedict for ordinary people. He points out many options in the Rule that could apply to anyone: listening, hospitality, discipline, persistence, and reminds us that for Benedict the monastery was a lay community. Laypeople wanting to deepen their faith and Christian living will find much valuable guidance in this well-written book."
William O. Paulsell, author of Longing for God: An Introduction to Christian Mysticism


"From a person deeply engaged in Benedictine communities comes this learned reflection on the charism of this Christian tradition. Patrick Henry has aptly described the ‘rootedness and far-ranging adventure’ of the Benedictines. Rather than withdrawing from the world, these vowed Christians engage it with humor, stability, interfaith curiosity, and their life of prayer, a pathway of generative living. Readers will be drawn to this vision of expressed faith, especially since the wisdom of the Benedictines is not relegated solely to cloistered life. It is for the world, truly."
Molly T. Marshall, PhD, Interim President, United Theological Seminary of the Twin Cities


“Benedictinism is of the substance of every now. It takes life as it is and gives it goals to achieve from one culture to the next. And it is exactly there that Henry breaks open the essence of Benedictinism to the modern world. He shows us the elements of a spiritual tradition that is imbedded in the basics of life when the rest of the world tilts toward its extremes. He gives us Benedictine vectors to steer by—community, tradition, hospitality, productivity and stewardship—as well as an immersion in the spiritual heart of life. He presents Benedictinism as a mirror to the world around it as it defines and redefines itself from age to age.”
Joan Chittister, National Catholic Reporter


"Patrick Henry, who has lived and worked among Benedictine men and women for many years, is offering us a refreshing and realistic look at the way that ancient Benedictine values are lived in the world today. At a time when so many societies are damaged by divisive ideology, naked greed, and lust for power, this book helps us to see there is another way. In these pages we find monastics—ordinary people living an extraordinary life of prayer and community—who make us realize that grounding oneself in love and hospitality is not ancient, but always new, and more relevant than ever."
Kathleen Norris, author of The Cloister Walk and Acedia & Me: A Marriage, Monks, and a Writer’s Life


"Patrick Henry breaks open the essence of Benedictinism to the modern world. He provides the elements of a world imbedded in the basics of life when the rest of the world tilts toward its extremes. He gives us vectors to steer by—community, tradition, hospitality, productivity, and stewardship, as well as an immersion in the spiritual heart of life. He presents Benedictinism as a mirror to the world around it as it defines and redefines itself from age to age."
Joan Chittister, OSB


"I am so grateful to Patrick Henry for writing this book as a reflection on and response to Rod Dreher’s The Benedict Option. Henry reads Dreher’s work with a deserved critical eye and ear, helping the reader to take the questions that concern Dreher seriously. However, he simultaneously challenges the monochromatic view of the 'Benedict option' that Dreher insists on and shares his experiences of the many different ways to live a faithful Christian life following the Rule of Benedict. Henry’s is a generous, capacious view of human faithfulness to the Gospel in the midst of the real and actual world we find ourselves in."
Abbot John Klassen, OSB