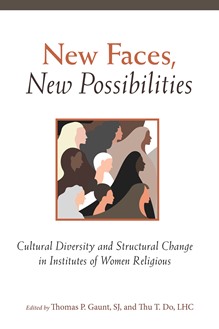 Cultural Diversity and Structural Change in Institutes of Women Religious
Edited by Thomas P. Gaunt, SJ, and Thu T. Do

Religious sisters have created educational and healthcare systems over the past two hundred years that have transformed the Catholic community in the United States. Through their ministry, sisters have served waves of immigrants and those pushed to the margins. The growing cultural diversity of newer sisters and the diminishing number of older sisters, therefore, is both a challenge and a creative moment to be critically examined.

This book examines these changes in culture and ethnicity among sisters, the structural impact of diminishing numbers, and the creative response to this new reality for religious life in the United States. In it, sisters from a variety of generations, cultures, and institutes join with CARA researchers to examine and reflect on CARA's recent research findings and their impact on the life and ministry of sisters today.

Thomas P. Gaunt, SJ, PhD, is a Jesuit of the USA East Province. He has a PhD in city planning from the University of North Carolina—Chapel Hill. Previously he was the executive secretary of the Jesuit Conference—USA, and director of formation and studies for the Jesuits of the Maryland and New York Provinces. Among his publications are: Catholic Parishes of the 21st Century, Pathways to Religious Life, and Catholic Bishops in the United States: Church Leadership in the Third Millennium.

Sister Thu T. Do, LHC, PhD, is a Sister of the Lovers of the Holy Cross of Hanoi and a CARA research associate. She received her PhD in higher education at St. Louis University. Her dissertation focused on understanding the scholarship initiative for international religious sisters in catholic higher education institutions. She co-authored Migration for Mission: International Catholic Sisters in the United States. At CARA, she is involved in various survey research projects, specializing in the area of religious life.