In Honor of St. Patrick

Chant for His Feast 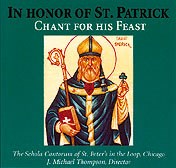 Transcribed from fifteenth-century Irish manuscripts, these Latin chants are sung, perhaps for the first time by anyone since the Reformation, by the Schola Cantorum of Saint Peter's-in-the-Loop. In Honor of St. Patrick presents Vespers in its entirety, word-for-word as it would have been heard in the late 1400s at St. Patrick's Cathedral in Dublin. The choral chant for the Mass is also included.

This is a rare opportunity to hear a local dialect of Gregorian chant. The CD booklet provides the texts in Latin, English, and Irish.

Selections for the First Vespers are:

Selections for Mass are:

J. Michael Thompson is the director of music ministry at St. Peter's Church, where he is the founder and director of the Schola Cantorum. He has been a pastoral musician and liturgist for twenty years, as well as a composer, author, and a noted promoter of the Liturgy of the Hours and Gregorian chant in contemporary parish situations.