Light from the East 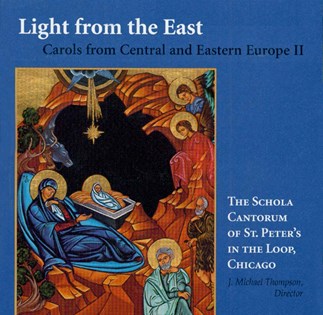 Taking its name from Pope John Paul II's letter (Orientale Lumen), Light from the East is a diverse recording. As a complement to the Schola's previous recording of There is Great Rejoicing: Carols of Central and Eastern Europe, these carols represent Polish, Croatian, Ukrainian/Carpatho-Rusyn, Slovak, Hungarian, Latvian, Russian, Czech, Moravian, Slovenian, and Romanian traditions.

The vivid faith and lovely melodies recorded on Light from the East offer even more reason to raise our voices in praise of the God who sent his only Son to the world.

J. Michael Thompson is the director of music ministry at St. Peter's Church, where he is the founder and director of the Schola Cantorum. He has been a pastoral musician and liturgist for twenty years, as well as a composer, author, and a noted promoter of the Liturgy of the Hours and Gregorian chant in contemporary parish situations.