Encounters with the Risen Christ 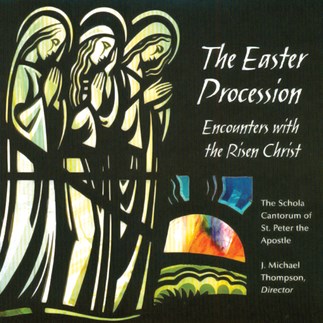 The paschal season is the most important of the entire Year of Grace but also the one that contains the least amount of music. The Easter Procession provides a juxtaposition of ancient chant and new compositions by James E. Clemens. This "Way of the Cross for the Easter Season," provides music of great textual integrity, permitting the Church to sing of the encounters with the Risen Christ. All of the pieces are eminently useful throughout the three-year Lectionary in the Easter season. The Clemens compositions are especially useful as offertory hymns.

Selections are Station 1: Resplendent With Virtues; Station 2: They Who Were With Mary; Station 3: Behold the End of Night; Station 4: When Mary Saw Two Angels; Station 5: Christ, Our Way and Our Life; Station Six: Since You Are the True Peace; Station Seven: Though The Doors Were Locked, O Lord; and Station 8: After Your Descent Into Hades.

The Schola Cantorum of St. Peter the Apostle, Chicago, has recorded more than twenty-seven other collections produced by Liturgical Press.