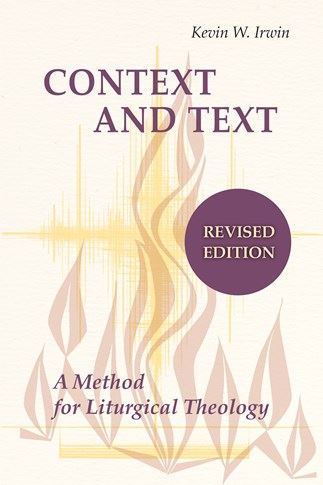 One of the most influential works in the debate over the concept and definitions of liturgical theology, Context and Text by Monsignor Kevin W. Irwin is now available in a completely rewritten, new edition.

In light of the historical, theological, and pastoral mandates of the Constitution on the Sacred Liturgy, Context and Text is both a proposal for and an example of an investigation of the church's liturgical praxis from a liturgical-theological perspective. This second edition, which includes an expanded introduction, covers:

Besides brand new chapters on time and sacramentality, and additions to the chapter on the arts, this edition also considers the "ongoing 'texts and contexts' of the liturgy as always a new event in the life and ongoing discussion of liturgical theology within Christianity.

Monsignor Kevin W. Irwin has been on the faculty of The Catholic University of America for over thirty years, where he held the Walter J. Schmitz Chair of Liturgical Studies (2000-2015), served as Dean of the School of Theology and Religious Studies (2005-2011), and is currently an Ordinary Research Professor. Msgr. Irwin has published eighteen books on liturgy and sacraments.

"I have found this to be one of the most comprehensive texts I have ever read. It not only presents a wealth of information taken from reliable sources but also addresses some of the salient enthusiasms and misconceptions of today. It will be of immense use to scholars as well liturgical practitioners. It deserves to become a standard text."
Archbishop Arthur Roche, Secretary of the Congregation for Divine Worship and the Discipline of the Sacraments

"This new edition of the book covers the same ground as one would expect, but much more. Irwin ends up with a series of constructive invitations, as it were, not only for liturgical theologians but for all Christians made by the liturgy: `Be honest, be attentive, be open, be grateful, be hopeful.' This new edition of Kevin Irwin's Context and Text is of enormous value in helping us to respond to these invitations and so to worship more fruitfully. I cannot recommend it highly enough."
Owen F. Cummings, Academic Dean and Regents' Professor of Theology, Mount Angel Seminary

"When Context and Text was first published in 1994, it made a very important contribution to the academic discipline of liturgical studies. The second edition will surely do likewise. Such confident assessment is based on two basic reasons. First of all, Irwin's method articulated in this book demonstrates clearly the importance of basing theological claims upon what the liturgy actually `says.' In turn, this dictates that sacramental theology must not divorce itself from liturgical theology. Secondly, and just as important, Irwin's work reminds us of the need to be attentive to the overall context in which liturgy is celebrated. Worship is so much more than words on a page; it is a living, evolving event oriented toward the eschaton."
Catholic Books Review

"A welcome update to a book that had become dated due to its commitment to the very contexts and texts that have changed since the 1994 edition. The new edition addresses these changes and further nuances Irwin's approach to the method of liturgical theology."
Theological Studies

"This is a thorough reworking of an important book. The inclusion of scholarship, church teachings, revised translations and ecumenical voices from the past twenty-five years, added to an already substantial base of church tradition, makes this a significant revision. The addition of examples from liturgical history and the recently reformed euchology enhances and fleshes out key principles and premises. In an era when the blogosphere coverage of the liturgy often reflects ideology, division, and superficiality, this book lays out the terrain in a serene and careful manner. It is a book that deserves deep reflection and prayer."
Abbot Jeremy Driscoll, OSB, Mount Angel Abbey and Seminary

"As to be expected, Kevin Irwin circles an almost overwhelming array of topics in liturgy around the ever present, ever new, dance between liturgy and theology. Is it liturgy shaping theology or theology shaping liturgy? It is these two, plus endless nuances of how the two are actually different expressions of the same reality-expressing and creating meaning. Structurally this large book is remarkably clear, introducing each area with a manageable overview before launching into the concepts further enfleshed by case studies of euchology, Scripture texts, or feasts and seasons of the liturgical year. The augmented section on time and the arts (liturgical ministry, music, and architecture) simply concretizes in new and engaging ways the breadth of what `text' means, and raises new questions about liturgical presiding as art, about music as ministerial practice, and about the context of space and place as full participant in the liturgical act."
Lizette Larson-Miller, Huron-Lawson Chair in Theology, Huron University College, Ontario, Canada