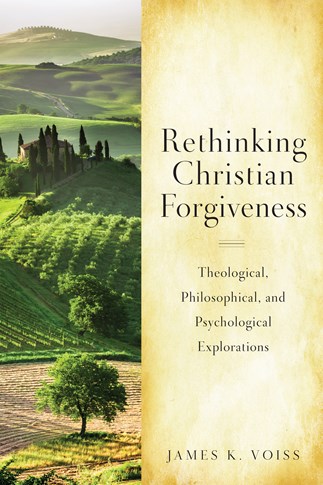 Is there such a thing as "Christian Forgiveness"? Christians speak as though there is. But what would it be? How would it differ from forgiveness as a basic human enactment? And if there is a distinctive Christian forgiveness, what might it have to say to our world today?

To answer these questions, the present work traverses three distinctive intellectual landscapes—continental philosophy, Anglo-American moral philosophy, and psychology—to establish a phenomenology of forgiving before turning to contemporary Christian literature. The multilayered dialogue that ensues challenges the assumptions of contemporary approaches-secular and Christian-and invites the reader to rethink the meaning of Christian forgiveness.

James K. Voiss, SJ, PhD, is a systematic theologian whose research interests have focused on the intersection of philosophy and theology, with a particular emphasis on theological method and cognitional processes. He received his PhD from the University of Notre Dame in 2000 while teaching full-time at Saint Louis University. He now serves as the assistant vice president for mission at Gonzaga University in Spokane, Washington, his alma mater.

"Whilst this book is clearly ambitious in its longing to tackle such a massive issue, Voiss is realistic in his intended outcomes. [It is a] well thought-out and grounded model of Christian forgiveness."
Gary Keogh, University of Manchester, Irish Theological Quarterly

"What exactly is forgiveness, and is it always possible? Are there times when it is unwise to forgive or when forgiveness ought to be withheld? These are some of the questions James K. Voiss takes up in his extensive, superbly researched, balanced, and consistently astute analysis of a practice we may not understand as well as we think. ... Any patient reader will encounter here the heart of the gospel."
Paul J. Wadell, The Christian Century

"In the context of our postmodern culture, identifying the parameters of `Christian' forgiveness and articulating its implications may be one of the greatest challenges of our era. Few questions are more urgent in a world divided by historic tensions among peoples and existential crises for individuals. James Voiss, standing within the context of his Catholic faith and analyzing this question within his intellectual formation as a priest and a scholar, has provided an engaging and challenging exploration of this issue. Anyone who has struggled with the need to forgive will find this study, which creatively engages philosophical, psychological and theological resources, a rich and helpful guide to understanding what Christian forgiveness can mean within the Roman Catholic tradition."
Catholic Press Association award, 3rd place

James Voiss, in Rethinking Christian Forgiveness: Theological, Philosophical, and Psychological Explorations, has compiled the most ambitious project of integrating the philosophy, psychology, and theology of forgiveness that exists today. It zeroes in on fundamental points. I would urge philosophers, psychologists, and theologians—particularly Christian theologians—who are setting out on a scholarly odyssey to understand forgiveness to begin at this scholarly jumping-off point for a thought-provoking, stimulating, surprising, and nondoctrinaire exploration of forgiveness.
Everett L. Worthington, Jr.; Director, Counseling Psychology Program; Virginia Commonwealth University; author (with Stephen J. Sandage) of Forgiveness and Spirituality in Psychotherapy: A Relational Approach

James Voiss has written a very important book on Christian forgiveness. The depth and breadth of his approach are outstanding. I wholeheartedly recommend this book to all those struggling with the meaning of Christian forgiveness.
Charles E. Curran, Perkins School of Theology, Southern Methodist University

"In the context of today's world atrocities, various `isms' (racism, colonialism, sexism, migration-ism), clashes (interreligious and intercultural), and violence, this is a very timely and important work."
Anna Abram, The Way

"[Voiss's] grasp of the literature in these fields is impressive (daunting, really), and his conclusion is a modest one: secular thinkers concur that forgiveness is a basic human act-it is part of our anthropology. This title is meant for the scholar, professional clergy, and graduate student."
Kenneth J. Zanca, Catholic Library World

"This book is both thorough and thoughtful. It is carefully written; one thing that stands out is the way Voiss delineates his points. Voiss' recognition of the mediation of meaning in forgiveness, the human developmental dynamisms involved, the radical nature (conversion) entailed, and the depth of psychic engagement implicated makes a significant contribution to current discussions of Christian forgiveness."
Cynthia S. W. Crysdale, School of Theology, University of the South, Sewanee

In this text James Voiss combines exhaustive phenomenological analysis with insightful relevant commentary on practical spiritual life to answer the question "Is there a distinctive Christian forgiveness?" In a patient and thorough dialogue with philosophers, psychologists, and theologians, he reinterprets forgiveness as far more than a virtuous act. The symbol "forgiveness" offers entry into the Christian interpretation of the essential relationship between God and human beings and human beings among themselves. Christians are called not simply to receive forgiveness but, as followers of Jesus, to gradually internalize an active reconciling Spirit after the pattern of Jesus and thus contribute to the rule of God in history. This may be the definitive theological study of forgiveness to date. All theologians and those attentive to spirituality should have it on their shelves.
Roger Haight, SJ, Director of the PhD Program, Uni on Theological Seminary