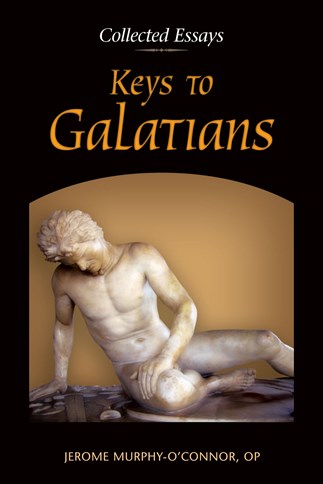 Over the course of five decades of scholarly work on the New Testament, Jerome Murphy-O'Connor has never been afraid to explore and question ideas that other scholars have simply presumed. In Keys to Galatians, he offers fresh perspectives on a rather neglected New Testament letter.

This book includes new thinking on the origins of the letter and new insights into its purpose. The author explains why he dates the letter much earlier than most scholars and why Paul's rhetorical technique should be considered nothing short of remarkable. He also explores illuminating hints about Paul's personality. Murphy-O'Connor recognizes in Paul a notable openness to new ideas and what he calls "a daring strategy that would have been unthinkable for one less confident in his rhetorical skills."

Jerome Murphy-O'Connor is one of the world's foremost authorities on the writings of Saint Paul of Tarsus. He has been a professor of New Testament at the École Biblique of Jerusalem since 1967. He is the author of numerous works, including St. Paul's Ephesus, St. Paul's Corinth, and Paul the Letter-Writer, all published by Liturgical Press.

The subtitle of this book could well be `Collected Essays Old and New.' Accompanying each of his previously published articles on Galatians, Murphy-O'Connor has added a postscript, each often comparable in length to the original essay. In each postscript, with characteristic incisiveness and wit, Murphy-O'Connor considers later scholarly attempts to grapple with the questions that had engaged him in his original essays. What the reader will discover is that many of Murphy-O'Connor's original insights and explanations have stood the test of time! Fortunately, they have been collected in this handy volume.
Maria Pascuzzi, St. Thomas University, Miami Gardens, FL

This collection of articles illustrates Murphy-O'Connor's expertise in the use of the historical-critical method. The articles reveal that a number of aspects are essential for the proper interpretation of Scripture. Thus, he incorporates history, geography, politics and culture into his study of Galations. . . . Murphy-O'Connor died in November 2013, which makes this collection of articles one of the last publications of his career. It is a worthy testimony to a great biblical scholar.
Mark Kenney, SM, Catholic Institute of Sydney, The Australasian Catholic Record

During the last years of his life the great New Testament scholar Jerome Murphy-O'Connor, OP, . . . was able to create and to publish four collections of his articles on First and Second Corinthians, Jerusalem, and Galatians. In Keys to Galations Murphy-O'Connor . . . includes his responses to those who had written in critique or in support of his ideas. This gives the collection an atmosphere of freshness that adds to the special sense of intellectual energy one always gets when reading Murphy O'Connor's work. Something has intrigued him, and he wants it to intrigue you as well.
John G. Lodge, SSL, STD, University of St. Mary of the Lake/Mundelein Seminary, Horizons: The Journal of the College Theology Society

For several decades Jerome Murphy-O'Connor has been one of New Testament scholarship's most engaging interlocutors. Never one to mince his words or fail to engage in dialogue with those who disagree with him, Murphy-O'Connor never ceases to offer intriguing and often novel points of view. His work advances scholarship by challenging others to rethink their positions. This collection of essays is classic Murphy-O'Connor-crystal clear and thought provoking.
Raymond F. Collins, Visiting Scholar, Brown University