When the Gospel Grows Feet

Rutilio Grande, SJ, and the Church of El Salvador; An Ecclesiology in Context 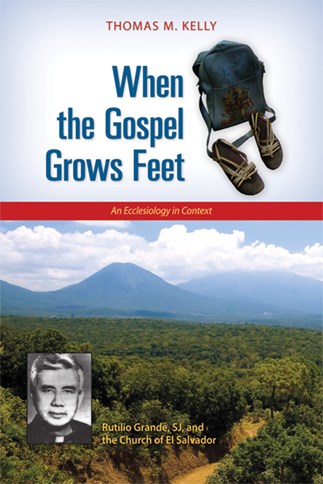 The Salvadoran priest Rutilio Grande, SJ, was killed in a hail of bullets on March 12, 1977, along with two passengers in the car he drove. The impact of this killing transformed his friend and archbishop, Oscar Romero, as well as the church in Latin America and throughout the world.

How could powerful forces within the overwhelmingly Catholic country of El Salvador execute a Roman Catholic priest and two innocent people in broad daylight in front of witnesses? Why would this same government go to the extreme of murdering thousands of lay Catholic ministers, dozens of priests, and even the nation's archbishop? Why would the government, and the oligarchy that supported it, believe it necessary to repress the church in such a brutal manner?

Thomas Kelly finds answers to these questions by exploring the church's identity and mission during the colonial period (1500 - 1820) and the transformative impact of Vatican II (1962 - 65) on the Latin American bishops. He considers Grande's life, formation, ministry, and death and his impact on Archbishop Romero. Finally, Kelly explains what Grande and the church of El Salvador can teach North American Catholics today.

Thomas M. Kelly is professor of theology at Creighton University. He is the author of Theology at the Void: The Retrieval of Experience and coeditor of Marriage and the Catholic Tradition.

"This book makes several valuable contributions to the ongoing reception and interpretation of Latin American liberation theology by the broader church . namely a detailed focus on the neglected figure of Rutilio Grande, an elucidation of a distinctively pastoral approach to liberation, and a vivid presentation of a kingdom-oriented ecclesialogy. Kelly's close study of Grande is a tremendous asset for English-speakers, including students, scholars, lay ministers, and clergy. Kelly has done a service to the world-wide (Catholic) church by recovering Grande's experience-tested insights."

"The . . . book gives a full account of Rutilio's early life and training, and especially of his pastoral work in Aguilares. . . . Rutilio saw clearly that his mission was to evangelize and not to political organization, but at the same time he understood that conscientisation in a situation of injustice and oppression would necessarily lead to organization. . . . I recommend this book highly."
Michael Campbell-Johnston, SJ, Head of the Jesuit Refugee Service during the civil war in El Salvador

Catholic theology walks the dusty roads of history, the same roads where Jesus walked and his first followers first met him. At its most elemental, Catholic theology is biography. Just so, the life of Rutilio Grande, beautifully narrated and interpreted in these pages by Professor Thomas Kelly, is more than a life: it is a dogmatic theology that shows us where and how the Gospel grows feet.
Kevin F. Burke, SJ, Jesuit School of Theology of Santa Clara University

Thomas Kelly has done a great service in presenting [Fr. Rutilio] Grande's thought on the role of the church in the Salvadoran context, and in analyzing the significance of that thought for the church in North America. . . . Kelly draws on Grande's own writings as well as his biographers' accounts, and in five chapters presents a full picture of Grande's formation, his innovative pastoral initiatives, and the ecclesial and political stances that precipitated his assassination in 1977. . . . Kelly is a very clear writer, with a teacher's sense of a clear, short explanation of a term or concept. This book would be an ideal companion text for undergraduate and masters students studying liberation theology, El Salvador, or the life of Oscar Romero.
Brian P. Flanagan, Horizons

It would be a mistake to categorize this book simply as a biography of Rutilio Grande. Professor Kelly's aim is to discern just what "an ecclesiology in context" looks like. . . . A helpful concluding chapter brings the discussion into the local context by asking what Rutilio Grande can teach the North American church. Here Professor Kelly calls attention to the vision of the poor church faithfully serving the kingdom of God and "including a greater reliance on social analysis, a healthier collaboration of lay and ordained, and a stronger emphasis on the social dimension of the faith." With that in mind this book should be read by anyone concerned about pastoral strategy in today's church. Discussion questions at the end of each chapter make this book an ideal text for undergraduate or graduate courses and for parish discussion groups.
Arthur J. Kubick, Catholic Books Review

Pope Francis seems set not only to beatify Romero; he has indicated that Grande, a prototypical Evangelii Gaudium "missionary disciple", might well follow. . . . Thomas Kelly's book is the first comprehensive analysis in English of Grande's life. He carefully places Grande's ministry and martyrdom in the context of the conference of Latin American bishops held in 1968 in Medell�n, Columbia, and the struggle between different elements within the Church that followed.
Julian Filochowski, The Tablet

This book is a 'must read' for those who want to understand how the church entered into the lives of its people in El Salvador after Vatican II and Medellín through the ministry of Rutilio Grande, SJ. When you begin with Rutilio, his life, his ministry, and his death, then you can understand the period of suffering endured by the prophetic church of El Salvador.
Jon Sobrino, Author of Jesus the Liberator and Witnesses to the Kingdom

Although [Thomas M. Kelly] wrote [When the Gospel Grows Feet: Rutilio Grande, SJ, and the Church of El Salvador] for students, the text has a far wider appeal to scholars and anyone interested in understanding the nexus between the church and politics in El Salvador or learning about Rutilio's understated but enduring influence on the Christian community. Sophisticated in its argument, the book remains broadly accessible by virtue of Kelly's crisp prose and willingness to clarify terms that may be unfamiliar to nontheologians. I discovered the book while preparing for a mission trip to El Salvador with the Ignatian Colleagues Program and found it to be an extraordinary resource.
Diana Owen, Conversations

Thomas Kelly's book, which highlights the life and martyrdom of Rutilio Grande, SJ, is a positive contribution to the needed reforms in the Catholic Church. Kelly's presentation is both educational and pastoral. . . . I agree with his conclusions and thank him for them. Finally, I am encouraged by his "Questions for Discussion," which follow the major chapters of the book, questions that lead to a clearer understanding of the influence that Rutilio Grande had on the pastoral development of Archbishop Oscar Romero. I definitely recommend this book.
Father Robert Pelton, CSC, Emmanuel

An excellent book—and well written. Thomas M. Kelly[`s]. . . book is a thorough, insightful analysis of the experimental evangelization method developed during the 1970's by Rutilio Grande, SJ, in the very poor rural parish of Aguilares, El Salvador. . . . Kelly's book is suitable for use in seminaries, in pastoral and evangelizing workshops, and for the continuing formation of bishops and priests. It is suitable also for college students and bright twelfth-grade seniors.
John J. Mawhinney, SJ, American Catholic Studies

"This book does an excellent job in presenting liberation theology in a simple yet profound way. It would be an exceptional tool for a church group interested in social justice or an undergraduate class on Catholicism in Latin America. Each chapter is followed by discussion questions that could lead to very constructive conversations in any context."
James Berry, Claremont Graduate University, Religious Studies Review