Wisdom Commentary: Acts of the Apostles 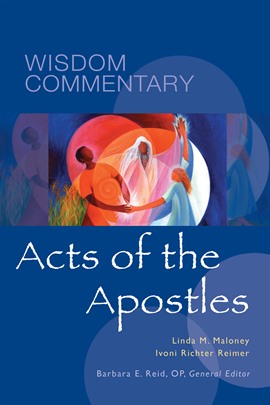 The Acts of the Apostles, the earliest work of its kind to have survived from Christian antiquity, is not “history” in the modern sense, nor is it about what we call “the church.” Written at least half a century after the time it describes, it is a portrait of the Movement of Jesus’ followers as it developed between 30 and 70 CE. More important, it is a depiction of the Movement as of what Jesus wanted: the inbreaking of the Reign of God. In this commentary, Linda Maloney, Ivoni Richter Reimer, and a host of other contributing voices look at what the text does and does not say about the roles of the original members of the Movement in bringing it toward fruition, with a special focus on those marginalized by society, many of them women. The author of Acts wrote for followers of Jesus in the second century and beyond, contending against those who wanted to break from the community of Israel and offering hope against hope, like Israel’s prophets before him.

Linda M. Maloney received her PhD in American studies from St. Louis University (1968) and her ThD in New Testament from the Eberhard-Karls-Universität Tübingen (1990), with Prof. Dr. Gerhard Lohfink as her Doktorvater. She is the first woman in the history of the Roman Catholic faculty at Tübingen to earn the ThD in Scripture. Having taught American history at several universities in the 1970s (and cofounded the Women’s Studies Program at the University of South Carolina), she joined the faculty of the Franciscan School of Theology at the Graduate Theological Union from 1989 to 1995. Thereafter, until 2007, she was academic editor at Liturgical Press. She was ordained to the Episcopal priesthood in 2003. Since 2005 she has served churches in the Diocese of Vermont and in the Anglican Church of Canada, Diocese of Montreal. She has been active since 1986 as a translator of books on Scripture, theology, and liturgy, mainly from German to English, including four volumes in the Hermeneia series from Fortress Press.

Ivoni Richter Reimer is a native of Brazil. She earned her ThD at the University of Kassel in Germany in 1990, working with Luise Schottroff. Her dissertation, translated into English (1995) as Women in the Acts of the Apostles: A Feminist Liberation Perspective, has been published in four languages. Since 1991 she has been a professor of theology and religious studies, in Rio de Janeiro at the Universidade Metodista and Faculdade Teológica Batista do Sul do Brasil, and then in Goiânia/Goiás at the Pontificia Universidade de Goiás, influencing three generations of students of feminist liberation theology and exegesis; she is also a Lutheran pastor, active in community building and developing leadership.

Willie James Jennings is associate professor of systematic theology and Africana studies at Yale University Divinity School. His specializations also include postcolonial and race theory. He received his BA from Calvin College, his MDiv from Fuller Theological Seminary, and his PhD in systematic theology from Duke University. He is the author of prize-winning works, including The Christian Imagination: Theology and the Origins of Race (Yale University Press); After Whiteness: An Education in Belonging (Eerdmans), the 2020 Publishers Weekly book of the year; and Acts in the Belief series (Westminster John Knox). In 2015 he received the Grawemeyer Award in Religion for his groundbreaking work on race and Christianity.