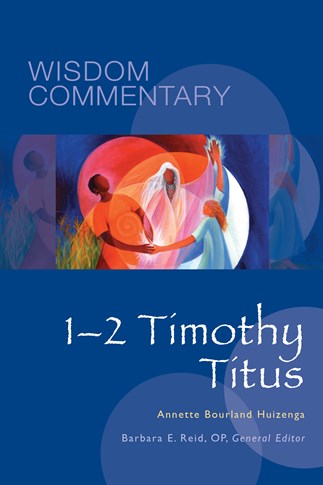 The author of 1 Timothy, 2 Timothy, and Titus argues in favor of a "traditional" Greco-Roman gender ideology: that because men and women are biologically different, they ought to behave differently in the family and society. His gender-specific beliefs carry over into his teachings for the house churches, where only free married men are eligible to serve as leaders, teachers, and preachers, while women are expected to take up the subordinate female domestic roles of wife, mother, and household manager. This volume encourages a deeper engagement with the difficult issues-gender, race, and power-raised by these letters. By studying the Pastoral Letters with our minds sharpened and our hearts turned toward a generous freedom, we can struggle most productively with the influences of their teachings, past and present, and we can create a future church and a future world that are more just, truly inclusive, and indelibly marked by God's grace.

Annette Bourland Huizenga serves as assistant dean and associate professor of New Testament at the University of Dubuque Theological Seminary (Dubuque, Iowa). Her research interests include the Pauline letters and communities, women in the early church, households in the Roman Empire, and ancient moral-philosophical education. These subjects all come into play in her first book Moral Education for Women in the Pastoral and Pythagorean Letters. She has written several articles about the expectations for women's behavior, clothing, and virtues in the ancient world. In 2015, the University of Dubuque awarded Dr. Huizenga with the William L. Lomax Award for excellence in Teaching and Advising.

"Dr. Annette Bourland Huizenga assembles a multitude of voices to expound upon these confounding epistles. With unflinching clarity, the scholars examine the text, wading through troubling waters, plunging into perilous depths, and finding refreshing life. The result is a commentary of indispensable wisdom, which every pastor should read and understand."
Rev. Carol Howard Merritt, Pastor and author of Healing Spiritual Wounds


""Another interesting aspect of this commentary is the role that other authors contribute to it. Huizenga does not try to convince the reader that one author is correct or not, but rather the reader is allowed to decide amongst the different presentations. This aspect brought a richness and diversity to the commentary that I have not seen with other commentaries and I would hope that other commentary series would incorporate this method."
Catholic Library World


"Annette Huizenga invites us into a difficult conversation about the Pastor's instructions regarding slavery and gender roles. Huizenga's interpretation, joined by the voices of numerous others, is a provocative starting point for contemporary appropriation of the Pastoral Epistles. Accessible and clearly written, this book will be a useful resource for years to come."
Susan Hylen, Candler School of Theology, Emory University


"Huizenga's is a good-quality, cohesive commentary, making a well-contextualized case for a reading of the Pastoral Epistles as patriarchal texts to be resistently engaged with."
Journal for the Study of the New Testament


"Clearly written and cogently argued analysis of the Pastoral Epistles. Huizenga's strongest contribution is bringing her deep knowledge of the Greco-Roman context to bear on these documents, often exposing layers of meaning otherwise lost to the casual reader and disclosing gender bias not only in the textual vines but also in the social lattice work around which they weave."
Interpretation: A Journal of Bible and Theology


"Through the provision of thoughtful and informed commentary, through the inclusion of lived experiences of international Christians grappling with this Scripture, and through masterful attention to specific translation matters, Huizenga has produced what I think is the best commentary on the Pastoral letters to date."
The Catholic Biblical Quarterly


"Professor Annette Huizenga clearly situates the Pastoral Letters within their ancient Greco-Roman context, demonstrating how they mirror the patriarchal society out of which they emerged, thus allowing the twenty-first-century reader to understand the epistles on their own terms. With great pastoral sensitivity, she is able to help readers discern how these texts might be liberative for both men and women today."
Laurie Brink, OP, Associate Professor of New Testament Studies, Catholic Theological Union


"Huizenga has written an extremely insightful, richly informed, and very readable commentary on the Pastoral Epistles. Her searching analysis defines the patriarchal tenor of the letters with cutting precision, showing how this ideology once worked and works still. This study is an impressive example of feminist biblical criticism, well attuned to the rhetorical cast of the epistles and their socio-historical location. The commentary also features nicely integrated excerpts from other women commentators, which enrich the discussion and symbolize a collaborative interpretive method. I highly recommend this commentary to both students and teachers."
Charles H. Cosgrove, Professor of Early Christian Literature, Garrett-Evangelical Theological Seminary