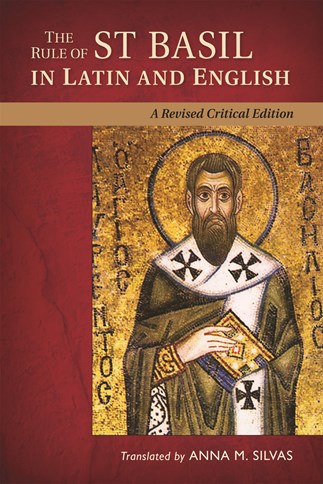 The Rule of St. Basil in Latin and English

Basil of Caesarea (AD 329-78), called "the Great" by later generations, was one of the fourth century's greatest theologians and pastors. His influence on the foundation of monastic life was enormous.

As he toured the early ascetic communities, members would ask Basil about various aspects of living the Gospel life. Their questions and Basil's replies were taken down by tachygraphers and eventually became the Small Asketikon, first published in 366. The Regula Basilii is a Latin translation of this work, done by Rufinus of Aquileia in 397. It is one of the major sources of the Rule of Saint Benedict, and Benedict recommends it to zealous monks, calling it "the rule of our holy father Basil."

This volume represents a new Latin edition, translated and annotated in English by Anna M. Silvas. It is based on the Latin text Basili Regula—A Rufino Latine Versa from Klaus Zelzer: Corpus Scriptorum Ecclesiastricoum Latinorum, Vol. 86. It also includes three extra questions and answers that survive only in the Syriac translation. Silvas balances masterfully between the rigors of academic research and the interests of an intelligent, non-specialist readership. This volume promises to become an indispensable resource in understanding both the history and the spirituality of monastic life.

Anna M. Silvas is a research fellow in the School of Humanities at the University of New England, Australia. Her research concentrates on late antiquity, particularly on the development of Christian monasticism and the spirituality of ascetic women in early and medieval Christianity. Her published works include translation of ancient literature as well as monographs. Forthcoming is the first critical edition of the Syriac Questions of the Brothers.

Her publications include Macrina the Younger: Philosopher of God (2008), In Quest of Basil's Retreat: An Expedition to Ancient Pontus (2007), Gregory of Nyssa: The Letters (2007), The Asketikon of Basil the Great (2005), and Jutta and Hildegard: The Biographical Sources (1998).

"The translation is stylish and accurate without being slavish. Text and translation are laid out on facing pages, with a critical apparatus and sometimes commentary beneath the Latin text, and notes beneath the English translation."
Dr. Dennis Minns, OP, Tjurunga