A Vision of Justice 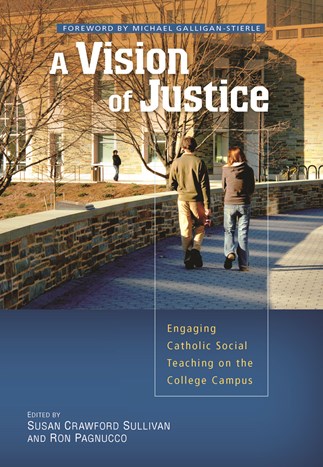 This book draws together the insights of social scientists, historians, and theologians in order to introduce readers to central topics in Catholic Social Teaching and to provide concrete examples of how it is being put into action by colleges and college students.

The contributors bring their disciplinary backgrounds and knowledge of Catholic Social Teaching to the exploration of the issues, making the book suitable for use in a wide range of college courses and settings. Discussion questions at the end of each chapter help readers to think about issues raised in the essays and to think creatively about Catholic Social Teaching in an ever-changing world.

Susan Crawford Sullivan is associate professor of sociology at the College of the Holy Cross. She has also been a visiting assistant professor at Harvard Divinity School. In addition to publishing numerous journal articles, she is the author of Living Faith: Everyday Religion and Mothers in Poverty (University of Chicago Press, 2011), which won the 2012 Distinguished Book Award from both the American Sociological Association (sociology of religion section) and the Society for the Scientific Study of Religion. She is a member of the Association of Catholic Colleges and Universities Peace and Justice Advisory Committee.

Ron Pagnucco is an associate professor in the department of peace studies at the College of Saint Benedict and Saint John's University in Minnesota. His work has appeared in Human Rights Quarterly; Research on Social Movements, Conflict and Change; Sociological Inquiry; and Research on Democracy and Society. With Jackie Smith and Charles Chatfield, he co-edited Transnational Social Movements and Global Politics: Solidarity beyond the State (Syracuse University Press, 1997), and with Chris Hausmann, he guest co-edited a special issue of the Journal for Peace and Justice Studies, "Peacebuilding in Africa" (2011). He is a member of the Association of Catholic Colleges and Universities Peace and Justice Advisory Committee.

With their new co-edited book, A Vision of Justice: Engaging Catholic Social Teaching on the College Campus, Susan Crawford Sullivan and Ron Pagnucco have provided an important service for all of us interested in assisting both students and faculty in learning more about the ideas and values from the rich body of teachings and practices that we call CST. Whether the CST stands for Catholic social teachings, Catholic social thought, or Catholic social tradition, it is the case that not many faculty or students on our Catholic college and university campuses have more than a cursory familiarity with this essential resource. That will change when they delve into this collection of intellectually stimulating, historically rooted, and empirically grounded essays. While not all will agree with every interpretation of the authors, all will benefit from reading and using this significant book in addressing the challenge we all face: to make CST no longer the "bes t-kept secret." We are in debt to the editors and authors of this book for their critical contributions to that task."
Kathleen Maas Weigert, PhD; Carolyn Farrell, BVM Professor of Women and Leadership; Assistant to the Provost for Social Justice Initiatives; Loyola University Chicago

The second special Assembly of the Synod of Bishops for Africa had the theme: The Church in Africa in the Service of Reconciliation, Justice and Peace (October 2009). The post-synodal exhortation Africae Munus of Benedict XVI gives the way forward, namely, that Africa must be committed to the search of peace in the continent. . . . Catholic universities should be involved in Education for Peace through having visions that are informative, formative and transformative and which ensures sustainable peace and reconciliation. This requires that peace studies be mainstreamed in university curricula. The book, A Vision of Justice, comes very handy at this time when there is need to learn how others have addressed challenges facing them. The book will be an addition to the scarce resources needed in matters of justice and peace."
Fr. Peter I. Gichure, Catholic University of Eastern Africa
From the foreword of the African edition of A Vision of Justice