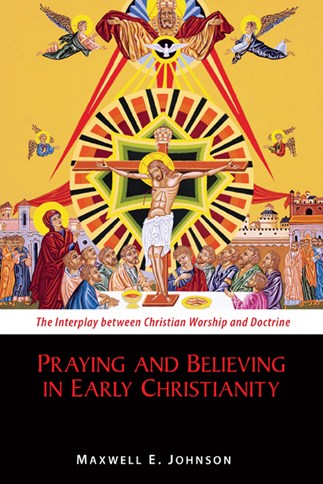 Praying and Believing in Early Christianity

The Interplay between Christian Worship and Doctrine
Maxwell E. Johnson

What was the impact of liturgy on the development of orthodox doctrine in the early Christian church? With renowned liturgical historian Maxwell E. Johnson as a guide, readers of Praying and Believing in Early Christianity will discover the important and sometimes surprising ways that worship helped to shape what was believed, taught, and confessed. In particular, Johnson considers this relationship in terms of

Johnson also explores the ways this relationship worked in the opposite direction: How did doctrinal developments shape liturgical texts in the patristic period? This is an excellent text for beginning students in liturgical studies at the master's level.

Maxwell E. Johnson is professor of liturgy at the University of Notre Dame and a pastor in the Evangelical Lutheran Church in America. He is the author, coauthor, or editor of more than fifteen books, including The Rites of Christian Initiation; The Origins of Feasts, Fasts, and Seasons in Early Christianity; and The Eucharistic Liturgies (all from Liturgical Press). He is a member of the North American Academy of Liturgy, Societas Liturgica, and the Society of Oriental Liturgy.

Finally! A renowned historian of liturgy explores at length the creative interplay between liturgical practice and theological reflection. This has been a desideratum for some time now, especially given the fresh readings of early Christian sources and the glimpses these provide of liturgical practices. In his new book, Max Johnson offers a nuanced, carefully argued, and expertly corroborated look at how doctrine shaped liturgical prayer and how prayer shaped the church's faith in the early centuries. Mapping the interplay between praying and believing in a multidimensional way, Johnson makes an important and much needed contribution to the ongoing conversation about the relationship between worship and doctrine in the church's life. I highly recommend this book.
Teresa Berger, Yale Institute of Sacred Music, Yale Divinity School


Masterfully synthesizing a wealth of early sources with the best of current scholarship, Johnson convincingly argues for a mutual and ongoing relationship between liturgical prayer and doctrine. He presents abundant evidence relating to the ways in which eucharistic, baptismal, and devotional prayer shaped doctrines emerging from Nicaea, Constantinople, Ephesus, and even Chalcedon. Similarly, he demonstrates how liturgical prayer was affected by doctrines received from these councils. This scholarship alone makes Praying and Believing in Early Christianity an important text.
David A. Pitt, Loras College, Dubuque, Iowa, Worship


Praying and Believing in Early Christianity is an important contribution to the question of the formative role of liturgy in doctrinal development. Johnson's audience is "beginning students in liturgical studies at the master's level" (xiv). He does assume some background in the theological controversies addressed by the first four ecumenical councils. However, in most cases Johnson provides enough context so that the book can be read with insight by those who are not knowledgeable about these controversies. Therefore, I would recommend a wider readership than graduate students in theological studies.
Wilburn T. Stancil, Catholic Books Review


Professor Maxwell Johnson of the University of Notre Dame has written a short but fulsome account of the influence of the liturgy on the development of the doctrines of grace, Trinity, Christology, and Mariology in the ancient Church and on early Christianity's moral practices. Entering into current debates in liturgical theology, Johnson challenges claims about liturgy and prayer as primary theology (lex orandi) and disagrees with the understanding of orthodoxia as `right praise' (it is `right teaching'). Rather, he sees a simultaneous development of both liturgy and dogma in the early centuries in which one should look for the theology embedded in the liturgy and doxology and supplication expressed in theology. While Johnson aimed this book at master's level students, it will be of interest also to his peers, who will find points to challenge precisely because they are so engagingly made.
The Rev. Dr. Frank C. Senn, STS, Pastor (retired), Immanuel Lutheran Church, Evanston, Illinois


Assembling ample documentary evidence from the early Christian centuries, and drawing on supportive argumentation from recent scholarship, Maxwell Johnson here demonstrates the prime role of worship and devotion in shaping the Church's doctrine and ethics; and then in turn he signals the recurrent need for the classical faith to inform contemporary liturgy and the moral life. A tightly reasoned book, with many illustrative examples!
Geoffrey Wainwright, Robert Earl Cushman Professor Emeritus of Christian Theology, Duke Divinity School


"A scholarly tome on the impact of liturgy on doctrine in the early Christian church. Johnson provides an excellent translation of significant sources throughout his chapters, serving as a great resource on how these ancient doctrinal and liturgical discussions shaped how we prayed and later believed."
John Thomas J. Lane, SSS, Emmanuel


This insightful book, while ostensibly for master's-level students in liturgical studies, should be on the required reading list for graduate students not only in liturgical theology, but also in historical theology, worship studies, systematic theology, practical theology, pastoral theology, moral theology, and Christian spirituality. This book should also be considered, at a minimum, as supplemental reading in church history courses for seminarians.
Donna R. Hawk-Reinhard, The Robert E. Webber Institute for Worship Studies, Horizons