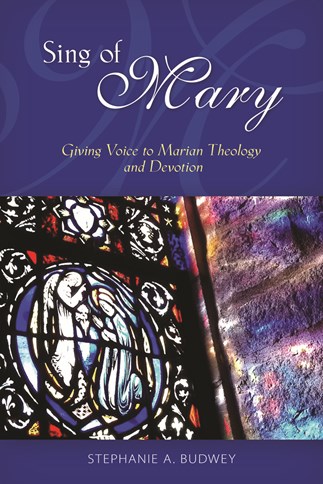 Giving Voice to Marian Theology and Devotion
Stephanie A. Budwey

Throughout the history of Christianity, Mary has been a beacon of hope to many who look to her. While Christians have always prayed to Mary, they have also sung to her in times of joy and sorrow. Sing of Mary analyzes Marian hymnody throughout Christianity—and particularly in the Roman Catholic Church in the United States from 1854 to today—focusing not only on the texts and music but also on the contexts out of which these hymns came. By using a holistic methodology—drawing from anthropology, history, liturgy, musicology, psychology, sociology, and theology—this study takes an interdisciplinary approach toward studying Marian theology and devotion through the lens of hymnody.

This volume, accessible to both laypeople and academics, provides readers with a clear and full understanding of Marian hymnody by looking at many examples throughout the history of Christianity through the present, thus shedding light on the history of Marian devotion and theology. The work concludes by providing hope for the future of Marian congregational song, particularly by exploring how the Magnificat can help Marian congregational song be meaningful to a wide range of Christians.

Stephanie A. Budwey, ThD, is the Luce Dean's Faculty Fellow Assistant Professor of the History and Practice of Christian Worship and the Arts at Vanderbilt Divinity School in Nashville, TN, USA where she also serves as Director of the Religion in the Arts and Contemporary Culture Program. She is the author of Religion and Intersex: Perspectives from Science, Law, Culture, and Theology (Routledge, 2022), several book chapters and articles, and co-editor of In Spirit and Truth: A Vision of Episcopal Worship (Church Publishing, 2020).

"[Budwey's] academic approach is noticeable in her careful review of the ecclesial documents directed toward the liturgy and Marian devotion, as well as the historical references from the life of the early church to the present. Her pastoral approach shines in the many descriptive reasons why such a deep chasm developed between devotional and liturgical prayer, citing specific devotional practices of nineteenth-century Catholics in America. This book is a welcome addition to seminary study, church music courses, and to the reading lists of our pastoral musicians."
Loretta Manzara, CSJ, The Hymn


"Stephanie A. Budwey's Sing of Mary is an interesting, thoroughly researched and ambitious book which may present some unique challenges for a conservative Catholic readership. Nevertheless it is a fascinating, detailed and ambitious study which invites further enquiry into Mary, one of the most influential figures in the Christian faith, and that can only be positive."
Bridget Curran, Tjurunga