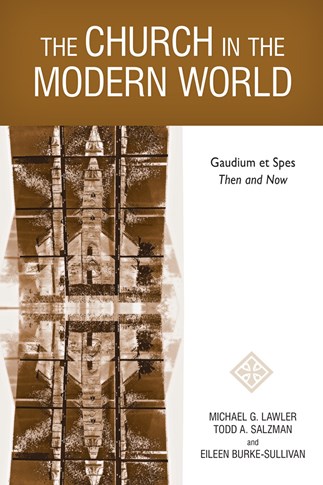 The Church in the Modern World

On the document's fiftieth anniversary, this book explores the historical origins of Gaudium et Spes, its impact on the Church's ecclesial self-understanding, and its implications for doing Catholic theological ethics for the specific ethical issues of marriage, social justice, politics, and peacebuilding.

The book engages in the ongoing communal discernment of the aggiornamento sought by the council's convener, Pope John XXIII, seeking to bring the Church up to date in the twenty-first century.

Michael G. Lawler is Amelia and Emil Graff Professor Emeritus of Catholic Theology at Creighton University. He has published twenty-two books and more than 150 scholarly essays on topics related to sacraments, marriage, and sexuality. He is the co-author with Todd A. Salzman of The Sexual Person: Toward a Renewed Catholic Anthropology, a Catholic Press Association 2009 book award winner.

Todd A. Salzman is professor of theology at Creighton University. He is co-author with Michael G. Lawler of Sexual Ethics: A Theological Introduction and has published over sixty scholarly articles in journals such as Theological Studies, Studia Moralia, Heythrop Journal, and Louvain Studies.

Eileen Burke-Sullivan, STD, holds the Barbara Reardon Heaney Chair in Pastoral Liturgical Theology and is associate professor of theology at Creighton University. She has lectured and published widely on liturgical, spiritual, and ecclesial topics and is co-author of The Ignatian Tradition, published by Liturgical Press.

"A key strength of this volume is the unity of voice afforded by the collaboration of these three Creighton University colleagues, who quite evidently coauthored all parts of this book as a single unit. In consistently admirable ways, this volume rises to the fierce challenge of covering much ground with great dispatch."
Thomas Massaro, SJ, Worship