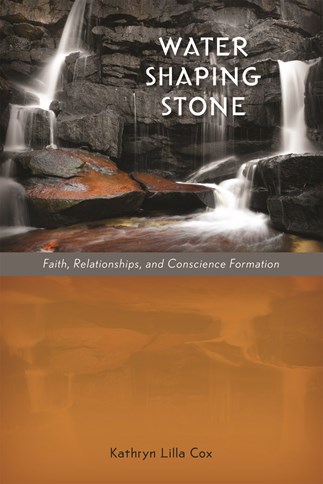 The Catholic Tradition requires the faithful to form and follow their conscience. This is the case even with the recognition that consciences can be malformed and one can make errors in practical judgments. Water Shaping Stone examines various aspects of this tradition regarding conscience by using, among other sources, twentieth-century magisterial documents, theologians' works, and Scripture.

Kathryn Lilla Cox argues that while the Magisterium retains teaching authority, and a responsibility to help form consciences through its teaching, focusing only on the Magisterium leads to incomplete formation. A more holistic vision of conscience formation means considering the formation of the moral agent to be a multifaceted process that draws on, for example, teaching, prayer, rituals, Scripture, practices, and virtues, along with relationships with the Triune God and communities of accountability. This vision of conscience formation retains the magisterial teaching authority while acknowledging discipleship as the theological basis for making and assessing practical judgments of conscience.

Kathryn Lilla Cox is associate professor of theology at Saint John's School of Theology and Seminary and in the undergraduate Department of Theology of the College of Saint Benedict and Saint John's University. She teaches courses in fundamental moral theology and applied ethics. Her research explores the theology of infertility, the role of emotions in the moral life, conscience, and the intersection of science and theology.

"This is excellent reading. She writes like the teacher and professor that she is. Faith, relationships, and conscience formation are tied to discipleship. A reviewer states that she has made a `graceful contribution' to the study of discipleship and conscience. She has some beautiful lines such as `following one's conscience is discerning where God is acting in our lives. Shaping stones is how God works on our hearts over time--like wave washing over the oceans' stones or rocks.' This was a stunning book."
Catholic Press Association award, 1st place

"Appeals to conscience in the midst of high-profile arguments about hot-button political issues have become more and more common in recent years, and this book found its genesis in helping students and others sort through what conscience is and how it might guide them with respect to such arguments. But Kathryn Lilla Cox is interested in far more than the relationship between faith and politics: instead, she guides her readers step by step, with clear and precise explanations and arguments, into an understanding of conscience that is not simply about particular moral choices but rather deeply rooted in the lifelong work of discipleship. Her insight, compassion, and depth of understanding shine as she argues that conscience, when understood in the context of the call to discipleship, can guide us through the ambiguous, shadowed, uncertain times of our lives, illuminating new possibilities for how we might better follow in the footsteps of Christ."
Colleen Mary Carpenter, PhD Sister Mona Riley Endowed Chair of the Humanities Associate Professor of Theology Book Review Editor, Horizons, The Journal of the College Theology Society Saint Catherine University

"This is a timely and superb book that very much needed to be written. Not only that, but its prose is both accessible and academically informed as well as inviting and compelling. Many persons, including Catholics and other Christians, may be conscious of conscience, but in an emaciated way that fails to interface robustly with the moral life or, for those of faith, the call to discipleship. Kathryn Lilla Cox is a conscientious and gracious moral theologian, and we are indebted to her for this graceful contribution to a topic that all too often is either oversimplified or over one's head."
Tobias Winright, Maeder Endowed Chair of Health Care Ethics, Saint Louis University

"Kathryn Lilla Cox finds a way to make progress along the well-trod path of commentary on conscience."
Worship

"The protest `I have to follow my conscience' often is just a way to shut down conversation. Kathryn Lilla Cox uses the claim to open up a dialog with a rich Catholic history of reflection on conscience, dissent, and scandal. With exceptionally clear writing, extensively documented research, and carefully nuanced analysis, she makes an original contribution to the relational quality of conscience wholly engaged in contemporary living."
Edward Vacek, SJ, Stephen Duffy Chair of Catholic Studies Loyola University

"Dr. Kathryn Lilla Cox's Water Shaping Stone is a greatly needed book. For too long, discussions of conscience have been couched in the tired debates of personal autonomy versus compliance to authority. Instead of rehashing the arguments or taking sides in them, Dr. Cox shifts the conversation by considering conscience in light of the Christian call to discipleship. Her perspective speaks to why forming a conscience is important, communities are essential for this process, and the development of the whole person cannot be neglected. This relational approach also leads to an interpretation of dissent and scandal not so much as problematic discord but rather as part of the inevitable and important struggles of a community pursuing faithfulness to Jesus. Dr. Cox's is a rich and significant perspective, one that should make Water Shaping Stone the starting point for any future discussions on conscience."
Jason King, A ssociate Professor of Theology, Saint Vincent College Associate Editor, Journal of Moral Theology