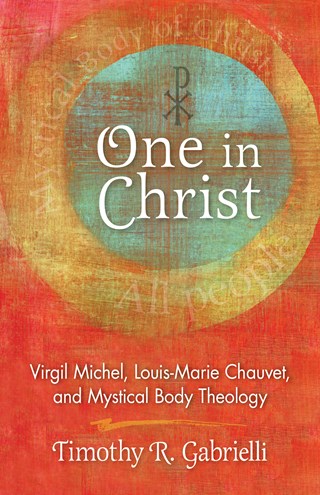 A theology that stoked much theological creativity in the first half of the twentieth century both in Europe and in the United States had receded by the latter half of the century. One in Christ explores the theology of the mystical body of Christ as developed by Virgil Michel, OSB, examines the reasons for its decline, and traces it throughout the work of Louis-Marie Chauvet, a surprising custodian of the mystical body's "French stream."

By delineating three major streams of mystical body theology, Timothy R. Gabrielli helps readers understand it more clearly and, in so doing, lays the groundwork for harvesting its potential for contemporary theology.

Timothy R. Gabrielli is an associate professor of theology at Seton Hill University in Greensburg, Pennsylvania, where he teaches courses in theology and in the liberal arts. He is also the author of Confirmation: How a Sacrament of God's Grace Became All about Us (Liturgical Press, 2013).

"This book provides a wealth of valuable insight into previously underdeveloped connections in the theology of the mystical body and gives tools for tracing its history. It would be well suited for a graduate course on topics related to twentieth-century Catholicism."
American Catholic Studies

"For those who have discovered inspiration in Michel's launching of the liturgical movement with a focus on the regeneration of society, or for those who have been enlightened by Chauvet's portrayal of the ethical challenge of sacraments, this book will have particular appeal. With extensive research and beautiful prose, Gabrielli offers substantial hope that mystical body theology might become popular once again. For this reason alone, this book is a very valuable book.
Catholic Books Review

"Contributing significantly to our understanding of twentieth-century theology, Gabrielli identifies three streams of mystical body theology: German, Roman, and French. Locating both Virgil Michel and Louis-Marie Chauvet in the French socio-liturgical stream, he brings together pre– and post–Vatican II theologies in a trans-Atlantic perspective that opens out beyond ecclesiology to include Christology, liturgy, social ethics, and fundamental theology, and he offers promise for a renewed mystical body theology. A stunning piece of historical theology and a fruitful frame for future developments!"
William L. Portier, Mary Ann Spearin Chair of Catholic Theology, University of Dayton

"This is a book for anyone interested in the connection between liturgy and social concerns that was prevalent in the United States liturgical movement under the leadership of Virgil Michel. Gabrielli traces its roots to the French stream of mystical body theology and makes a persuasive proposal for the reappearance of this stream in the theology of Louis-Marie Chauvet."
Margaret Mary Kelleher, OSU, retired from the faculty of the School of Theology and Religious Studies at The Catholic University of America

"Sacraments have theological, spiritual, practical, and societal premises and implications. Timothy R. Gabrielli provides a meticulous investigation of late nineteenth- and twentieth-century `streams' of mystical body theology that illuminate these dimensions. Rather than the oft-used `model,' his more flexible term `streams' readily incorporates his rich analytical foundations and appropriations of mystical body theology, thereby observing similarities and differences among theologians. Gabrielli's analysis of Virgil Michel's mystical body theology with nuances from Louis-Marie Chauvet provides a platform to revisit the social and theological implications of sacraments given new realities of a `global body.' Gabrielli's work also might be used in continued dialogue with the historical practice of that theology in the United States."
Angelyn Dries, OSF, Professor Emerita, Saint Louis University

"Through admirably sophisticated research and lucid prose Timothy Gabrielli delivers a compelling (if not page-turning) analysis of the modern history of mystical body theologies to demonstrate the dead ends the concept reached when narrowly restricted to ecclesiastical and even nationalistic agendas, as well as a new realization of its pastoral-theological potential in the fundamental theology of Louis-Marie Chauvet. The climactic chapter on Chauvet provides fresh contextualization and insight into a body of work that continues to revitalize the interconnections between word, sacrament, and ethics as the very life of the church."
Bruce T. Morrill, SJ, Edward A. Malloy Chair of Catholic Studies, Vanderbilt University