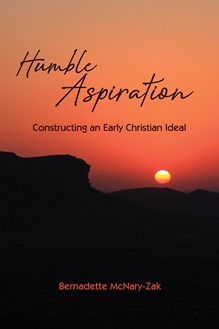 What does it mean to be humble like Christ? In this book, Bernadette McNary-Zak explores various concepts of Christian humility in late antiquity. To help the reader deepen their understanding of Christian humility, McNary-Zak takes a close look at some of the ways different types of humility operated as a relational value in specific contexts involving ascetic women. With this approach, the author shows how, at the very margins of a male-dominated culture, the ascetic woman represented a form of renunciation of self that enabled her to function as a symbol of Christian humility for females and males alike. A life that is both affirmative of biblical precedent and subversive of societal norms thereby becomes a life lived in deliberate aspiration toward an unrealized eschatology.

Bernadette McNary-Zak, PhD, is associate professor of religious studies at Rhodes College in Memphis, Tennessee. She is the author of several books including Useful Servanthood: A Study of Spiritual Formation in the Writings of Abba Ammonas (Cistercian Publications, 2010). Other publications include two co-edited books and a number of articles in her areas of research.

"Bernadette McNary-Zak's book Humble Aspiration presents a thoughtful look at concepts of humility in the Christianity of late antiquity. Because the status of women in both secular and religious worlds was that of second-class citizens, McNary-Zak turns to the humility of Christian ascetic women to find a key to Christian humility as a value. Her book explores theological, social, and intellectual humility as exemplified in the lives of women in the early church."
Catholic Books Review

"Bernadette McNary-Zak offers a convincing portrayal of the polyvalent values attendant upon humility. Humble Aspirations represents McNary-Zak's comprehensive examination of humility in late antiquity, from Syriac and Coptic texts to texts penned by familiar representatives of the Latin church such as Augustine. Furthermore, McNary-Zak's facility in drawing out the very best from these primary sources is exemplary. She shows with remarkably fine detail how `humble aspirations,' though shared by late antique Christian women and men as imitation of Christ, were more subversively realized in the late antique female ascetic than the male ascetic."
Rachel Wheeler, PhD, Assistant Professor of Theology, University of Portland

"On the whole, I found McNary-Zak's book fascinating. I recommend this book for all interested in monastic values and history."
Spirit and Life

"A study of humility that is like no other academic resource that has been available before on this topic."
Magistra

"Humble Aspiration is a welcome addition to a growing body of scholarship on the meaning and practice of humility. In this thoroughly researched book Bernadette McNary-Zak illuminates the construction of Christian humility in the lives of fourth to seventh-century female ascetics, demonstrating clearly its `multivalent' nature and its centrality to their commitment to the way of Christ. While twentieth-century feminists were right to critique the much later construction of humility as a feminine virtue, ensuring women's submission to patriarchal power, McNary-Zak brings to life an assembly of early Christian women who stand strongly as equals, alongside their more celebrated male counterparts, in their imitation of the humble Christ. Christian humility was indeed a `countercultural' force in the world of late antiquity, as McNary-Zak richly demonstrates."
Jane Foulcher, Associate Head of School, School of Theology, Char les Sturt University

"In a world where humility is often misunderstood, especially as applied to women, this book offers a deep and wide exploration of the concept. McNary-Zak gathers views of humility from ancient and modern sources into a resource unlike any other currently available."
Judith Sutera, OSB, Mount St. Scholastica, Atchison, Kansas