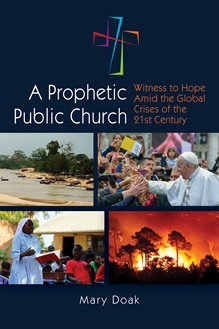 Globalization is uniting the world more closely than ever before while at the same time increasing the likelihood of division and conflict. Humanity faces problems of an unprecedented scope: vast inequality, climate change threatening the conditions of life on this planet, and a great population migration that includes human trafficking and desperate refugees.

What does this global plight demand of a church called to be a sign and instrument of the union of all in God? In this book, Mary Doak shows how the church must rectify its own historic failures to embody the unity-in-diversity it proclaims, especially with regard to women and Jews. Only then, and through responding to the demands of the current global crises, can we learn what it means to be the church-that is, to be a prophetic witness and public agent of the harmony that God desires and the world deeply needs.

Mary Doak (PhD, The University of Chicago) is a professor of theology at the University of San Diego. Her publications include Divine Harmony: Seeking Community in a Broken World (Paulist Press, 2017), Translating Religion (Orbis Books, 2013, coedited with Anita Houck), and Reclaiming Narrative for Public Theology (SUNY, 2004), as well as various articles on public theology, eschatology, and ecclesiology. She is currently serving as president of the College Theology Society and is a past president of the American Theological Society (Midwest).

"This book deserves praise for being timely, insightful, and constructive. All can agree that this book is a valuable resource for becoming the church we are called to be."
Theological Studies

"From its very beginnings, Christianity has utilized women and Jews in its texts and teachings to represent the abject `other' or second-class creatures to be redeemed within salvation history, with devastating effects. Doak challenges Christians to confront their contribution to the justification of abuse of women and Jews in history and current contexts when they retain them as symbols rather than allowing them to represent themselves. Expect to read a book not only about being better churches but also about being better human beings."
Dr. Cristina Lledo Gomez, BBI - The Australian Institute of Theological Education

"In A Prophetic, Public Church, Mark Doak provides an ecclesiology of the church based less on what the church 'is' than what it 'does'-and what it does, or should, is be a prophetic sign and instrument of the ways of being human together that God has always hoped for us. Without shying away from the past failures of the Christian community to be that effective sign, particularly in relation to anti-Semitism and misogyny, Doak provides a theology of hope in the church's potential to transform our public life. In highlighting the potential of the church to challenge injustice in our economic life, our responses to climate change, and our treatment of migrants in our midst, Doak demonstrates her own participation in our church's vocation to be the sacrament of the reign of God in our world."
Brian Flanagan, Marymount University, author of Stumbling in Holiness: Sin and Sanctity in the Church

"Only a public theologian of Mary Doak's scholarly achievements and a burning sense of justice can produce a book such as this. A Prophetic, Public Church examines the most pressing issues of our day, including religious anti-Semitism, misogyny, global economy, climate change, and global migration. Digging deep into the teachings of Vatican II and Pope Francis, it offers a prophetic voice that calls for repentance and transformation both within and without the Church. An unparalleled scholarly tour de force, this book is a must-read for all Christians, especially those living in the United States, as they confront the moral challenges of the twenty-first century and seek the prophetic wisdom of the Bible and the Tradition to meet them with justice. I recommend this book with the greatest enthusiasm."
Peter C. Phan, The Ignacio Ellacuria, SJ, Chair of Catholic Social Thought, Georgetown University

"Doak’s book is of innumerable value to any Christian who aims to understand better the Second Vatican Council’s call for the church to be a sign and instrument of communion and who desires to be a participatory member within this body, faithfully responding to the “signs of the times” with a prophetic witness to and public engagement with a God who calls each and every one of us to have hearts after God’s own. Undergraduate and graduate courses in ecclesiology, the Second Vatican Council, and Catholic social teaching will find this book a particularly rich resource for discussion and reflection on what it means to be and, more importantly, to do church in the 21st century."
Reading Religion

"In this highly readable book, Mary Doak offers a passionate and engaged discussion of the great issues facing today's church. Drawing on the writings of Vatican II she focuses on the church as a prophetic agent of political, social, and economic change. In what is an ecclesiology of doing rather than being, she offers a hope-filled vision that will provoke and challenge those inside and outside the churches as they seek the transformation of society."
Mark D. Chapman, Professor of the History of Modern Theology, University of Oxford

"Set in the context of our fractured society, Mary Doak analyzes the challenges to the Church's mission of being a sign and instrument of communion. Blind spots which distort Christian faith include its traditional supersessionist anti-Judaism and devaluation of women, as well as today's neoliberal idolatry of the market, degradation of the environment, and hostility towards the millions displaced or forced to migrate. Profoundly researched, she draws on numerous studies and contemporary scholars, some of them controversial. But Doak's approach is always nuanced, wise, and deeply Catholic. This is a major ecclesiological work that should be widely read."
Thomas P. Rausch, SJ, Emeritus T. Marie Chilton Professor of Catholic Theology, Loyola Marymount University

“Anyone who might persist in identifying church from their own limited perspective after reading this book would be hard pressed to explain how they can maintain their limitation. It is a primer for study and discussion and effectively invites the reader into a fuller appreciation and understanding of what globalization entails and requires.”
Catholic Media Association

"Mary Doak speaks out of a deep and mature love for the Catholic Church. She calls for all Christians to renew their sense of community and mission to the world by acknowledging in thought and action what it means to follow Jesus in the face of contemporary crises. By focusing on the historical mistreatment of Jews and women, as well as the urgent present matters of global inequality, climate change, and migration, Doak has her finger precisely on the point where many critical lines of the church and the world intersect. In all cases, Doak strives for balanced and inclusive positions without abandoning her passionate, prophetic commitment to Christian faith and the urgent call to justice. I am glad to have this book to which I can refer the many people, young and old, who express to me their struggles over the very issues addressed here."
Dennis M. Doyle, Professor of Religious Studies, University of Dayton

"A Prophetic, Public Church is a timely work in the area of ecclesiology that calls the church to reform. The author challenges Christians to make real-life sacrifices that will lead to universal change and the greater likelihood for communion among all people."
Catholic Books Review

"For Christians who have been concerned about the relevance of the Church for the future, this work is a source of hope."
Emmanuel