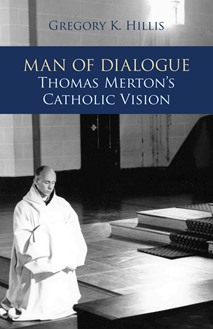 "Anyone who is interested in Merton as a person, a monk, or just his ideas, will gain much from the book."
The Downside Review

"This book is an inspiring read that brings a person into the mind of Thomas Merton and challenges the reader to pursue the spiritual life in earnest."
Catholic Media Association

"Professor Hillis engages the reader with a compelling introduction to the life and thought of the Trappist who spent his time in prayerful dialogue with God and the world around him. He demonstrates with ease through the lens of Merton’s many published works and personal journals, that the great man was from the early days of his conversion totally immersed in and utterly loyal to Catholic thought, tradition, prayer, liturgy and lived this authentically in his monastic vocation and in dialogue with the modern world."
Bishop Fintan Monahan, author of Peace Smiles, Rediscovering Thomas Merton

"This significant book boldly takes on those critics who think of Thomas Merton as someone who compromised his Christian and Catholic identity. It shows how Merton's eager and hospitable commitment to dialogue, justice, equality and non-violence is grounded in a Christian doctrine of human nature at the heart of which is the Eucharist. Making good use of unpublished or unfamiliar writings by Merton, as well as the more obvious sources, Hillis paints a deeply persuasive picture of a man who never turned back from either his baptismal or his monastic promises, but lived them out with fresh energy and profound, prayerful imagination."
Rowan Williams, former Archbishop of Canterbury

"Thomas Merton was a faithful Catholic. But his interest in Eastern religions, his challenges to the status quo in the church, and even his ideas about monasticism, have made his Catholicism suspect in some quarters. Greg Hillis's beautifully written and expertly researched book restores Merton's Catholicism to where it should be in studies of his remarkable life: at the center."
James Martin, SJ, author of Learning to Pray and Jesus: A Pilgrimage

"This remarkable book is masterful."
The Merton Seasonal

"Readable and scholarly in the best sense of both words, the author makes his case amply and convincingly."
American Benedictine Review

"Man of Dialogue takes off where Pope Francis left off in 2015 when he recognized Thomas Merton as one of the four most spiritually influential voices in American history. The book puts to rest silly past debates on whether Thomas Merton was 'sufficiently Catholic.' Perhaps more importantly, it shows how Merton's writings on the Eucharist, prayer, racism, peace and non-violence and inter-faith dialogue are as relevant today as when he first penned them. This is a book for those well-versed in Merton's thought as well as those becoming acquainted with this most significant of spiritual teachers."
Judith Valente, vice president of the International Thomas Merton Society

"In Man of Dialogue, Dr. Gregory Hillis unpacks the gift of Thomas Merton as a true man of dialogue and finds his own faith journey in the life of his subject. While acknowledging Merton's complexities and fallible experiences, Dr. Hillis seeks to set the record straight about Thomas Merton's identity throughout his life as a thoroughly, deeply rooted Catholic. This book includes a compelling account of Merton as an active contemplative seeking to be engaged in the joys, sufferings, anguish, and grief of this world and Merton's rich insights and fascinating encounters with a wide array of individuals. Man of Dialogue provides a path that diverges from soundbites and quick solutions to the courageous and intelligent path of dialogue so desperately needed by our world."
Most Reverend Joseph E. Kurtz, Archbishop of Louisville

"His Holiness the Dalai Lama praised Thomas Merton for introducing him to 'the real meaning of the word "Christian".' In Man of Dialogue, for the first time, Gregory Hillis comprehensively mines the breadth and depth of Merton’s Catholic Christianity and shows the profound extent of Merton’s embrace and commitment both to his Catholic faith, and to his vocations as a Trappist monk at the Abbey of Gethsemani, and as a priest of the Catholic Church."
Paul M. Pearson, Director, Thomas Merton Center

"Thomas Merton counted his Catholic faith, along with his monastic vocation and calling to be a writer, as three gifts for which he would be ever grateful. In this exceptionally informative and insightful study, Gregory Hillis illuminates Merton’s Catholic vision and the ways in which it informed his identity, shaped his spirituality, inspired his prophetic witness, and made him, in the words of Pope Francis, a 'man of dialogue.' A significant contribution to Merton studies and a must read!"
Christine M. Bochen, Professor Emerita, Nazareth College, Rochester, New York

"Beautifully written, this book paints an engaging, instructive, even inspiring picture of a unique twentieth-century American Catholic. And the undertones of its argument reverberate beyond Merton himself. Who indeed is a Catholic? Someone who fits into the tight confines of a group narrowly defined? Or one who senses the presence of God in the truth, beauty, and goodness of other religious traditions, who finds a world of grace in the struggle for justice, who sees the image of God in everyone walking around at Fourth and Walnut? While focused with great insight on Thomas Merton, this book shines helpful light on the current tension about Catholic identity in the church."
Elizabeth A. Johnson, CSJ, Distinguished Professor of Theology Emerita, Fordham University

"For all that has been written about the fine innerworkings of Merton’s expansive mind, most have missed what Hillis demonstrates as the mainspring—his identification with the priesthood and the universalism of the Eucharist, the principle part of his everyday life."
Br. Paul Quenon, Abbey of Gethsemani, author of How to Live, and In Praise of the Useless Life

“Still today, Thomas Merton calls us to immerse ourselves in the meaning of the Eucharist and in Christ’s radical call of love. With the world beset by so many simultaneous crises, Merton’s example of genuine encounter with God and with others, as Hillis ably points out, offers us a way forward.”
America

"Greg Hillis' Man of Dialogue comes at a pivotal time relative to the Church's appreciation of the thought of Thomas Merton. Merton--as his own assessment of the liturgical reforms of the Council reveal--transcends the normal, sometimes polarized boundaries, we have created in the Church today. Readers of Man of Dialogue will be invited into the very same dialogue that Merton engaged in as they are immersed in Merton's discourse around racism, liturgy, Marian devotion, and religious obedience. Hillis, in his careful treatment of Merton, has revealed himself to be the most important scholar around Merton in the Church today."
Timothy P. O’Malley, PhD, Director of Online Education, McGrath Institute for Church Life, University of Notre Dame

"A deeply learned yet highly accessible exploration of the whole of Merton’s spiritual journey, and most compellingly, the living wellspring of Catholic theological, mystical, and sacramental sources that nourished Merton’s life from conversion to death. Gregory Hillis brings wonderful breadth, humanity, humor, and fresh insight to every facet of the irrepressible mosaic that is Thomas Merton, and, yes, his capaciously Catholic theological and apologetic literary genius. Without avoiding critical assessments of its famous subject, Man of Dialogue should put to rest every superficial dismissal of Merton’s legacy—and sadly, they are 'legion'—that downplays or denies Merton’s extraordinary witness as a Catholic Christian monk and priest of Gethsemani, to the day of his death and well beyond."
Christopher Pramuk, University Chair of Ignatian Thought and Imagination, Regis University

"Do we need another Merton book? Yes, we need this one. We all will benefit from Hillis' efforts here."
Catholic Books Review