From the Depths of the Heart

Annotated Translation of the Prayers of St. Gregory of Narek 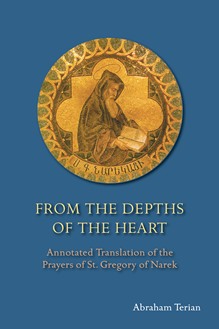 St. Gregory of Narek (ca. 945–1003), Armenian mystic poet and theologian, was named Doctor of the Church by Pope Francis on April 12, 2015. Not so well known in the West, the saint holds a distinctive place in the Armenian Church by virtue of his Prayer Book and hymnic odes—among other works. His writings are equally prized as literary masterpieces, with the Prayer Book as the magnum opus. With this meticulous translation of the prayers, St. Gregory of Narek enters another millennium of wonderment, now in a wider circle. The prayers resound from their author’s heart—albeit in a different language, rendered by a renowned translator of early Armenian texts and a theologian.

Abraham Terian is emeritus professor of Armenian theology and patristics at St. Nersess Armenian Seminary, Armonk, New York. He is an internationally renowned expert in the fields of Hellenistic, early Christian, and medieval Armenian literatures—fields in which he has published extensively, including The Festal Works of St. Gregory of Narek (Liturgical Press, 2016). Most recently, he was Robert F. and Margaret S. Goheen Fellow in Classical Philosophy at the National Humanities Center, Research Triangle Park, North Carolina (2018–2019).

"With From the Depths of the Heart, a meticulous translation of the prayers, St. Gregory of Narek enters another millennium of wonderment, now in a wider circle."
SirReadaLot

"This is a book to be taken slowly, bit by bit, and used for prayer and reflection. Terian's translation and extensive annotation is most welcome."
Spirit & Life

"Professor Terian’s translation of St. Gregory of Narek’s Prayers is masterful. His scrupulously literal rendition is lucid, the poetry, exquisite. Like the prayers themselves, the edition captures the reader’s mind, heart and soul—by its erudite introduction and annotations, by the rhapsodic beauty of the English, and by the power of the words to lift the supplicant to the realm of the Divine Word."
Bishop-Primate Michael Daniel Findikyan, Eastern Diocese of the Armenian Apostolic Orthodox Church of America

"St. Gregory of Narek, revered and beloved monastic author of tenth-century Armenia, gave the 95 poetic prayers to his own tradition; called simply The Narek, they came to be regarded as a form of sacred scripture. Armenians often travelled with a copy of this beloved book; English speakers can now see the reason for their attention and their devotion. We are deeply indebted to Professor Abraham Terian for this clear, elegant and beautiful translation of the prayers, which demonstrates why St. Gregory has at last been declared a doctor of the universal church."
Robin Darling-Young, The Catholic University of America