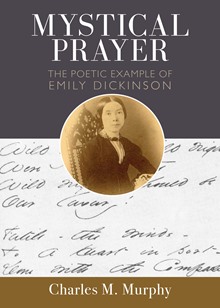 "In exploring this poetic example, Murphy has created a literary criticism of theological depth that enlightens another facet of the singular Emily Dickinson. Recommended for parish and academic libraries."
Catholic Library World


"Margery Kempe's autobiography was lost for 400 years. Thomas Traherne's meditations were rescued from a trash heap after the author's death. This book now demonstrates, more than 130 years after Emily Dickinson's death, how we're only beginning to see her poems for what they were."
Jon M. Sweeney, editor of A Course in Desert Spirituality by Thomas Merton


"Charles Murphy's examination of Emily Dickinson's poetry in the Christian mystical tradition adds another layer to the growing corpus of serious treatments of her work as so much more than simply private lyric verse. In brief compass and with great care, Murphy enlarges our sense of the possibilities that Dickinson's genius lays before us. No one who reads this book will ever think quite the same again about her poetry."
Paul Lakeland, Fairfield University, author of The Wounded Angel: Fiction and the Religious Imagination


"Look no further if you are interested in gaining a deeper understanding of the holy mystery of Emily Dickinson's poetry. Weaving together history and biography as well as writings from mystics, popes, and poets, Charles M. Murphy skillfully explores the `sacramental consciousness' of one of America's greatest poets."
Betsy Johnson-Miller, author of Rain When You Want Rain and Fierce This Falling


"This little book offers a fine introduction to the Christian mystical tradition and to the work of one of America's most creative and innovative poets."
Spirit & Life


"Charles Murphy's book weaves together an amazing range of sources: literary and theological, mystical and personal anecdote. It explicates Emily Dickinson's poetry with delight and sensitivity and raises the reader's awareness of her spiritual aspirations and fragile beauty of soul. It is an exploration of poetry and prayer that will be valued by all those who are drawn to either or both."
Marie Noonan Sabin, author of Evolving Humanity and Biblical Wisdom