A Conversation about Grace, Virtue, and the Eucharist 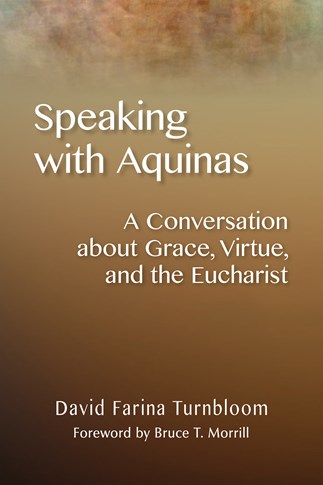 David Farina Turnbloom is assistant professor of theology at the University of Portland. He has published numerous articles focusing on the relationships between Christian worship and ethics. He is a board member of the ecumenical group The Liturgical Conference. He holds a PhD in systematic theology from Boston College.

"This stimulating book sets a high bar for further study of other medieval authors like Bonaventure to situate their sacramental, eucharistic theologies more broadly within the broader context of the whole scope of their work. The book is a creative and thought-provoking contribution to contemporary eucharistic theology."
Worship

"An ambitious project, but quite a necessary one. Turnbloom's attempt to build a dialogue between different aspects of Aquinas's thought and bring it into a more recent kind of liturgical theology is admirable. The author's writing is accessible to the ordinary reader who might not be familiar with Thomistic theology."
Ecclesia Orans

"Turnbloom provides a comprehensive understanding of the Eucharist while allowing Aquinas's work to be given a place that is extremely helpful to Christianity as a whole rather than getting bogged down"
Robert Huttmeyer, Catholic Library World

"David Turnbloom invites us into an entirely new conversation about how the Eucharist nourishes our moral lives. Into the circle of contemporary theologians like Chauvet, Morrill, and Baldovin, Turnbloom invites Thomas Aquinas and gives him room to speak about his grammar of grace and virtue. As Turnbloom channels Thomas, we hear the thirteenth-century theologian with a whole new voice speaking to us about the spiritual life of friendship with God as a pilgrim community. Refreshingly satisfying discourse for hungry Christians on the move!"
James F. Keenan, SJ, Canisius Professor, Boston College

"Lucid, compelling, and conversational, David Farina Turnbloom's Speaking with Aquinas connects the sacramental theology of the Summa Theologica with Thomas Aquinas's soteriology and ethics. By examining the relationship between grace and the virtues, Turnbloom uncovers the presuppositions of Thomas Aquinas's treatises on the sacraments and on the Eucharist. Aquinas's `multiple grammars' allow him to treat the paradoxical agency of both Christ and the Christian in the sacraments. As a result, in this nuanced but accessible treatment, the Holy Spirit and the Christian life of faith emerge as the center of Aquinas's sacramental theology. Speaking with Aquinas reveals the links between Christology, sacrament, the Eucharist, and ethics, showing how Aquinas's sacramental soteriology can still speak to readers today."
Kimberly Belcher, PhD, University of Notre Dame

"Many elements of his work will facilitate conversation among even the most entrenched parties on either side, namely, those who would absolutize scholastic grammars of the sacraments, and those who would do likewise to modern grammars, such as those grounded in patristics, anthropology, or studies of symbols."
Theological Studies

"By retrieving Aquinas' own understanding of grace and virtue, and the underlying principles of theosis, Turnbloom shows that there is not necessarily a deficit in Aquinas so much as in the interpretation of his work. Turnbloom also makes a strong case for the importance of virtues of charity and prudence in constructing `right' acts of religion today, perhaps offering a rejoinder to the more aggressive elements on both sides of current liturgical debates."
Anaphora

"The author succeeds in presenting a profound theological vision that is both refreshing and illuminating in the world of scholarship and highly pertinent in view of contemporary questions pertaining to sacraments and liturgy."
Horizons