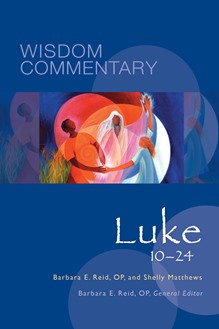 Shelly Matthews holds a ThD from Harvard Divinity School and is professor of New Testament at Brite Divinity School, Fort Worth, Texas. She is the general editor for the SBL Press series Early Christianity and Its Literature and the cofounder and cochair of the SBL Program Unit Racism, Pedagogy and Biblical Studies. Her books include Perfect Martyr: The Stoning of Stephen and the Construction of Christian Identity (Oxford University Press, 2010) and The Acts of the Apostles: Introduction and Study Guide: Taming the Tongues of Fire (T&T Clark, 2017). She is currently writing a monograph under the working title A Feminist Guide to Early Christian Resurrection: Justice, Authority, Presence.

“An incredible accomplishment! Informed by a diverse array of methodologies as well as by contexts ancient and present, this volume covering Luke 10–24 is in tune with both literary sensibilities and ideological sensitivities from beginning to end. The fact that it is done in not only the spirit but also the reality of feminist collaboration makes this volume truly unique. With this second volume, we now have in our hands a treasure trove of wisdom to guide our reading of Luke’s Gospel of women.”
Tat-siong Benny Liew, Class of 1956 Chair, Professor in New Testament Studies, College of the Holy Cross


“The advent of this splendid second volume marks an unprecedented moment in the long history of Lukan commentary: a multi-voiced, multi-ethnic, gender-centered commentary on the entire gospel. Even apart from its significance as the first full-length feminist commentary on Luke, this work is a model for future multi-authored projects in biblical scholarship.”
Stephen D. Moore, Edmund S. Janes Professor of New Testament Studies, The Theological School, Drew University


“In this volume, Barbara Reid and Shelly Matthews set their sharp feminist-critical eyes on Luke’s text, not to rip it to shreds, but to shed laser light on the social, historical, and ideological contours shaping the narrative. Where Luke offers a large cast of female characters but mostly relegates them to bit parts with few lines, Reid and Matthews give them vital voices that speak across the ages. This commentary, like all the volumes in this marvelous series that Reid edits, beautifully transposes the ancient wisdom of Scripture into a liberating feminist key for all people and, indeed, all creation."
F. Scott Spencer, former professor at Wingate University and at Baptist Theological Seminary at Richmond, author of Song of Songs from the Wisdom Commentary series