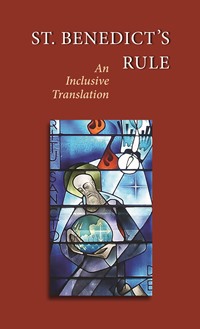 
“Whether the reader is meeting the Rule of Benedict for the first time, or has lived by its wisdom for decades, Sister Judith's work offers an abundance of tools to listen for God's voice everywhere. The gender-neutral language is fluid, elegant, and timely. This is a treasure I look forward to returning to for years of prayerful rumination.”
Kate Ritger, author of Benedictine Living: Reflections for Prayer and Meditation


"What Sutera has created is a text that is no longer limited to its masculinized context. This enables the Rule to be read in a world that is unafraid of wholeheartedly embracing the wondrous fluidity of gender. What a gift and a blessing!"
Tjurunga


“Well, it’s about time. This is the latest step in the renewal of Rule scholarship since Vatican II, making available the fruits of half a century of labor in translation and critical commentary for daily use in inclusive language. Sr. Judith is a careful writer, choosing her words thoughtfully so that the reader always knows what she is talking about. It is a wonderful gift in these days of vague language when clarification only means turning up the volume. Sr. Judith’s translation is a new vade mecum for Benedictine monastics and oblates of the 21st century.”
Jerome Kodell, OSB, Benedictines Magazine


“Judith Sutera has produced a translation of the Rule that seeks to maintain its meaning and challenge but has replaced gendered vocabulary with more neutral terms. She has produced a flowing translation that will serve the purpose of community reading well.”
Michael Casey, OCSO


“With joy we dive into this book and finish it being convinced about the value not only of the book but of the life it shows.”
Sr. Aquinata Böckmann, OSB


“Sr. Judith Sutera has done a masterful job of making a spiritual classic accessible to everyone who sincerely seeks God. She teaches us to listen with the ears of our heart and to open our eyes to the light that comes from God.”
Fr. Brendan Freeman, Mellifont Abbey, Ireland


"22,000 monastics and over 25,000 lay oblates follow St. Benedict’s Rule today—living witness to the viability of this 6th century document. By making its language inclusive, Judith Sutera gives the 21st century greater access to it and opens up new spaces, within and without the monastery, for sharing Benedict’s wisdom."
Catholic Books Review


“Having read many translations and interpretations of Benedict’s Rule, I could hardly put this one down. Its language is fresh without being obtrusive, and Sr. Judith’s commentary highlights both Benedict’s practicality and deep prayerfulness. She writes 'from the inside' and illuminates for both monastics and others the ethos of one of Christianity’s most influential documents.”
Bonnie B. Thurston, author of Shaped by the End You Live For: Thomas Merton’s Monastic Spirituality


"It is the combination of good scholarship and lived Benedictine experience that makes this resource so useful."
Magistra


“Judith Sutera's translation of the Rule reads like most modern English texts, it's inclusivity feels natural. I imagine if Benedict had written his Rule today it would have sounded a lot like this.”
Jason Paul Engel, OblSB


“As Sr. Judith notes in her introduction, this is not a paraphrase nor a popularization of the Rule, but rather a faithful translation from the Latin reflecting terminology familiar to contemporary readers and welcoming all people to personally identify with its wisdom. I much appreciate Sr. Judith’s lovely phrasing of Benedict’s ‘customary desire for balance and compassion,’ and her understanding that the key to Benedict’s approach is that ‘no one is ever to despair of God’s mercy.’ (p. 151-2) Emphasis on these two aspects of the Rule clearly emerge from a life lived in familiarity with every verse of the Rule of Benedict, in fidelity to its guidance, and in communion with sisters similarly committed.”
Norvene Vest, oblate of Benedictine Sisters of Virginia, author of What is Your Practice? Lifelong Growth in the Spirit


"Future generations of Benedictines and their friends will not be distracted by exclusive language thanks to Judith Sutera’s translation. Available in two convenient forms, with and without daily commentary, this is a very accessible, welcome resource."
WATER