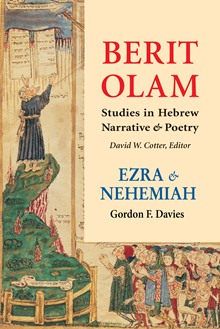 Ezra-Nehemiah has been neglected in biblical studies, but it is important as one of the few windows into the Persian period of Israel's history, the setting for so much of the final shape of the Hebrew Bible. To know this period is to know what influenced these redactors. In Ezra and Nehemiah Gordon Davies provides that knowledge using rhetorical criticism, a methodology that reveals the full range and progress of the book's ideas without hiding its rough seams and untidy edges.

The purpose of rhetorical criticism is to explain not the source but the power of the text as a unitary message. This approach does not look at plot development, characterization, or other elements whose roughness makes Ezra-Nehemiah frustrating to read. Instead, it examines the three parts of the relationship – the strategies, the situations, and the ffects – between the speaker and the audience. Rhetorical criticism's scrutiny of the audience in context favors the search for the ideas and structures that are indigenous to the culture of the text.

Rhetorical criticism is interested in figures of speech as means of persuasion. Therefore, to apply it to Ezra-Nehemiah, Davies concentrates on the public discourse – the orations, letters, and prayers – throughout its text. In each chapter he follows a procedure that: (1) where it is unclear, identifies the rhetorical unit in which the discourse is set; (2) identifies the audiences of the discourse and the rhetorical situation; (3) studies the arrangement of the material; (4) studies the effect on the various audiences; (5) reviews the passage as a whole and judges its success. In the conclusion, Davies explains that Ezra-Nehemiah makes theological sense on its own terms, by forming a single work in which a range of ideas is argued.

Biblical scholars as well as those interested in literary criticism, communication studies, rhetorical studies, ecclesiology, and homiletics will find Ezra and Nehemiah enlightening.

Gordon F. Davies is associate professor of Old Testament and dean of students at St. Augustine's Seminary of Toronto. Besides his work on the early and late biblical books of Exodus and Ezra-Nehemiah, he also researches the emerging areas of cross-cultural studies and political theology.