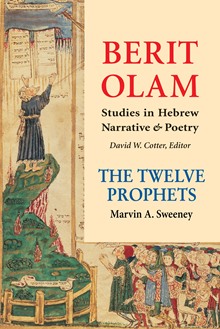 There is generally no common material that binds together the works of the individual prophets that comprise the Twelve, but through Sweeney's commentary they stand together as a single, clearly defined book among the other prophetic books of the Bible.

The Book of the Twelve Prophets is a multifaceted literary composition that functions simultaneously in all Jewish and Christian versions of the Bible as a single prophetic book and as a collection of twelve individual prophetic books. Each of the twelve individual books—Hosea, Joel, Amos, Obadiah, Jonah, Micah, Nahum, Habakkuk, Zephaniah, Haggai, Zechariah, and Malachi—begins with its own narrative introduction that identifies the prophet and provides details concerning the historical setting and literary characteristics. In this manner each book is clearly distinguished from the others within the overall framework of the Twelve.

By employing a combination of literary methodologies, such as reader response criticism, canonical criticism, and structural form criticism, Sweeney establishes the literary structure of the Book of the Twelve as a whole, and of each book with their respective ideological or theological perspectives. An introductory chapter orients readers to questions posed by reading the Book of the Twelve as a coherent piece of literature and to a literary overview of the Twelve. Sweeney then treats each of the twelve individual prophetic books in the order of the Masoretic canon, providing a discussion of each one's structure, theme, and outlook. This is followed by a detailed literary discussion of the textual units that comprise the book.

Marvin A. Sweeney, Ph.D., is professor of Hebrew Bible at the School of Theology at Claremont and professor of religion at the Claremont Graduate School. He has served as the Dorot Research Professor at the W.F. Albright Institute and as Yad Hanadiv/Barecha Foundation Fellow at the Hebrew University of Jerusalem. He is the author of Isaiah 1-39, with an Introduction to Prophetic Literature (FOTL 16; Gran Rapids: William Eerdmans, 1995); Isaiah 1-4 and the Post-Exilic Understanding of the Isaianic Tradition (BZAW 171; Berlin and New York: Walter de Gruyter, 1988), and other studies on biblical literature..